Bryce Papenbrook
"I will become a Samurai... I'm definitely going to be a Samurai... A Samurai and a Luxuror at that..."
—Issachar, Shin Megami Tensei IV

Issachar is a character from Shin Megami Tensei IV.

Although the same age, Issachar has always acted like a big brother to Flynn and is his best friend. More than anything, he is determined to become a Samurai not just to rise in status, but to also protect the people he holds dear.

Issachar was born in the village of Kiccigiorgi and is the childhood friend of Flynn.

At the start of the game, Flynn is woken up and led by Issachar to Mikado Castle seeking the location where the Gauntlet Rite will be held, hoping to become a Samurai and rise up from his Casualry status. However, the results were not favorable for him and he could only watch as his friend assumes the position that he was dreaming of for so long. Dejected, Issachar remains in Mikado Castle for several days.

Flynn meets him again by Lake Mikado after accompanying Jonathan and Walter to buy some bread for breakfast while on holiday. The encounter is awkward and brief, with Issachar trying his best to be happy for his friend while dealing with his own frustration. He declines their offer to eat together as he has to return to Kiccigiorgi and tend the fields.

During the demon attack in Kiccigiorgi in which the Samurai were tasked to guide the fleeing villagers out of Kiccigiorgi Forest, Issachar is mentioned to have never returned from several rescued villagers. Issachar is seen again in the deeper section of the forest. Having read books given out by the "Black Samurai," he has developed severe contempt over the disparity between the two castes and scoffs at how the samurai are just tools for the Luxurors.

The knowledge from the book coupled with his anger over these realizations and deep-seated bitterness over failing the Rite made Issachar decide to embrace the demonic. He is then fought as a boss.

During the course of the battle, the demon-possessed Issachar will ask Flynn what the latter considers to be his current caste. Depending on the answer, Issachar's combat turn will either end instantly, increase by 2 half Press Turns, or continue on if he was ignored. When low on HP, he will implore Flynn to strike him down and end his misery. Depending on whether Flynn decides to strike him down or attempts to spare him, his comrade's reactions will change, with Walter yelling at him for his "kindness" in trying to spare someone who is suffering with Jonathan backing Flynn's choice, or leave Jonathan wondering if there was any other way to ease his pain besides death. His final words are asking Flynn to become a magnificent Samurai and change the rotten world.

During the infiltration of the Eastern Kingdom of Mikado, Nanashi is presented with the opportunity to explore the castle town and the areas around it. Should he choose to venture to Lake Mikado, he is given the option to take a nap by the lakeside. Upon doing so, a brief memory of the peaceful days spent between Issachar and Flynn will be heard in Nanashi's dream.

After being woken up by Asahi, Nanashi discovers that he is now holding a fish hook. Upon noticing it, the spirit of Issachar is heard, wearily imploring Nanashi to deliver it to Flynn.

Close to the ends of the Bonds route, Nanashi offers the Fishing Hook to Flynn. Recognizing it from his deceased friend, Flynn humbly thanks Nanashi for the reminder and vows to continue on for the sake of his late childhood friend.

Close to the end of the Anarchy route, Nanashi can offer the Fishing Hook to Flynn. But as he is resurrected as a servant of Dagda and Nanashi, he thinks that the Fishing Hook is pointless. The hook is then discarded by Nanashi, never to be seen again.

Issachar and Flynn at Lake Mikado, gazing at the city from afar 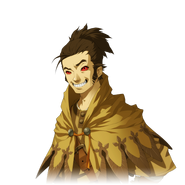 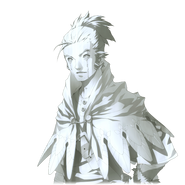 From the Book of Genesis, Issachar is the 9th son of Jacob, the ancestor of the tribes of Israel, and his first wife, Leah. Issachar succeeded part of his father's legacies and derived his own tribe of Israelite.