Isis is a demon in the series.

Isis, also known as Aset or Eset, was a mother goddess in ancient Egyptian religious beliefs, whose worship spread throughout the Greco-Roman world. She was worshiped as the ideal mother and wife, patron of nature and magic; friend of slaves, sinners, artisans and the downtrodden, as well as listening to the prayers of the wealthy, maidens, aristocrats and rulers.

The goddess Isis was the first daughter of Geb, god of the Earth, and Nut, the goddess of the Overarching Sky, and was born on the fourth intercalary day. Isis was said to have blackmailed the true name of Ra the supreme sun god out of him, by making a snake poison him, which could only be cured by Isis herself. (Ra, being a god, cannot die from the poison, but the pain would still last.) In later myths about Isis, she had a brother, Osiris, who became her husband, and she then was said to have conceived Horus. Isis was instrumental in the resurrection of Osiris when he was murdered by Seth. Her magical skills restored his body to life after she gathered the body parts that had been strewn about the earth by Set.

Kaneko's design for Isis draws inspiration from both French fashion designer Jean-Paul Gaultier's "boléro perroquet" and depictions of the deity Isis with wings in Egyptian mythology, as seen here.

Isis is one of the three alignment bosses tied to the final stages of the main storyline, and was originally the Innocent Azura. After defeating her, those on the Chaos route acquire the ability to fuse her in a special triple fusion of Parvati, Thoth and Phantom. She also appears as an enemy variant in the Ueno Mirage gold level instance. She gains a new feature after Mitama fusion, which allows her to drain Almighty affinity at a level-based percentage.

Isis appears in the Womb of Grief on floors that have previously been cleared as part of the EX Mission Wardens of Womb of Grief. She is the first Warden in the quest line, and upon defeat will be replaced with the next Warden, Volvo.

Upon defeat, Isis can be summoned through a special fusion requiring Persephone, Rukh and Hathor once the protagonist reaches level 67.

The client in the Challenge Quests Isis' Search for the Coffin and Osiris' Resurrection. In the first she asks for Flynn's aid on the 2nd Stratum of Naraku, stating Seth has tossed her husbands coffin into the waters that lead to Naraku and asks for Flynn to bring it to her. She thanks him when he retrieves it and will try to be wary of Seth before leaving. In the second quest she is found in Zojoji Temple at the Tokyo Tower in Roppongi. She had prepared for her husband's resurrection only for Seth to have attacked during it, tearing apart Osiris' body and scattering it across Tokyo. She asks Flynn to retrieve his parts. She revives her husband after the parts are retrieved and Seth defeated. She tells Osiris it was Flynn who helped thwart Seth's schemes and plans on preparing the celebration feast at their home to celebrate his revival.

"The mother goddess of Egypt. She is wife and sister to Osiris, god of the underworld.
Known for her powerful magic, she could perform miracles such as raising her husband from the dead. As the patron goddess of the dead, her image can be found at many burial sites."
—Shin Megami Tensei IV Apocalypse compendium

Isis can teach Nanashi the Zandyne, Samarecarm and Mazandyne skills through her Demon Whisper. She benefits from learning Force and healing skills.

"The mother goddess of Egypt. She is wife and sister to Osiris, god of the underworld.
Known for her powerful magic, she could perform miracles such as raising her husband from the dead. As the patron goddess of the dead, her image can be found at many burial sites."
—Shin Megami Tensei V lore

Isis is a member of the Lady race and can be found occupying an Abscess with Oberon and Hanuman in Kanda. She is also a member of the Egyptian Bethel branch and commissions several quests for the protagonist.

In both Innocent Sin and Eternal Punishment, Isis is the highest level Persona of the Magician Arcana that can be obtained through normal means.

Isis is Yukari Takeba's ultimate Persona, which Yukari acquires after learning the truth about her father and strengthening her resolve. Isis maintains the cow motif of Yukari's initial Persona, Io, as well as gaining the headdress of Hathor.

Isis also uses unique skills outside of her normal moveset when fought as an opponent, which are as follows:

Isis is the ultimate Persona of the Empress Arcana. She can only be fused after maxing Margaret's Social Link.

Isis represents the bond between Yu and Margaret. She was summoned after Izanagi took serious damage from Ameno-sagiri's attacks, with Yu being stuck under huge rocks. Her levitation abilities assisted Yu in getting back up once again.

She is one of the two ultimate Personas that Yu summoned that was not created through fusion, the other being Sraosha.

"Osiris's wife as well as his younger sister. Upon the death of her husband, she revived him with her incredible magic power. Isis is seen at many gravesites as the guardian goddess of the dead."
—Persona 5 background

Isis is the fourth Persona of the Priestess Arcana and can be found as a Shadow in Futaba's Palace and in the Akzeriyyuth area of Mementos with the title "She of Life and Death." She is the first Persona to learn the Makarakarn skill. When itemized using Electric Chair execution, Isis yields a Zionga Skill Card.

Isis is used in an advanced fusion with Thoth, Anubis and Horus to produce Seth.

The Tyrant queen of Sand Land. Nagahisa Kai meets with Isis in her palace the Pyramid to find out his origins, revealing that his powers are not those of a Devil Child, but rather an Angel Child. To help him on his path of finding out his origins, she gives him a Sphinx.

Mirai Kaname/Setsuna Kai meet with her afterwards, seeking to learn what is going on. She reveals a prophecy to them about the end of the world or its rebirth, and asks that they spar with her. After the battle she gives them advice and the pieces of Sand Lands Keys of Norn. Later she can be contacted via the Devi-Phone, where she asks them to take care of another stray Sphinx she found.

Returning as the Tyrant of the reborn Earth Expanse, Isis has left Moloch in charge while she tends to other matters. Takaharu Ougi and Masaki Kuzuha both meet her to ask for a cure to the Dark Slumber. She reveals to them that the famous demon doctor Dian Cecht would have a cure, but that they must travel to the Ice Expanse to retrieve it.

"A demon capable of foretelling the future with her mystic deck of all-seeing tarot cards."
—Demonary, DemiKids

Isis can perform the combo Pyramid with Anubis and Holy Song with Osiris. Isis has the power Rogue Charm.

Isis serves as the boss of the Green configuration of the Brutes Base in Ajna. A gimmick used during the boss fight with her is that she will respond to any element cast against her during a turn by casting a single target -dyne spell of an element used back at the party. This can be used to the party's advantage by only using one type of element and having a Shield spell ready to block the retort.

Isis can also use Reinforcements to summon up to two other Isis demons. Together they will start using enemy combo elemental spells. Two Isis demons will use multi-target -dyne spells such as Maragidyne. The full group of three will use stronger elemental combos such as Trisagion.

"The mother goddess of Egypt. She is wife and sister to Osiris, god of the underworld. Known for her powerful magic, she could perform miracles such as raising her husband from the dead. As the patron goddess of the dead, her image can be found at many burial sites."
—Devil Survivor 2 compendium

Isis is a unique demon that doesn't require a particular fusion combination to create. Instead, the protagonist has to achieve a Fate level of 5 with Hinako Kujou before it is available. Once this has been achieved, Isis is unlocked for fusion on all subsequent runs as long as the save is imported.

"The mother goddess of Egypt. She is wife and sister to Osiris, god of the underworld. When the God Seth dismembered and threw Osiris to the Nile River, it was Isis who brought him back to life. Soon after, their son Horus was conceived. Originally the goddess of harvest, she is also known for being "the goddess of resurrection" or "the moon goddess." Not only was she worshiped in Egypt, but even Greece and Rome as well."
—Shin Megami Tensei: Liberation Dx2 compendium

Isis is a common 3-star demon and Shiori Koden's starter. 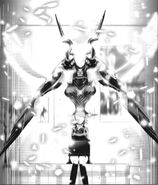 Isis as she appears in Persona 3 The Movie

Isis with Kami-Nami and Artemisia in Persona 3 The Movie

Isis in Persona 4 The Animation 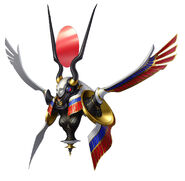 Isis as she appears in Majin Tensei

Isis as she appears in Shin Megami Tensei IMAGINE 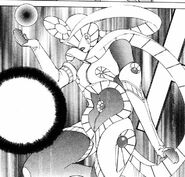 Isis as she appears in Persona: Tsumi to Batsu

Isis in Persona Q: : Shadow of the Labyrinth