Ishtar (イシュタル, Ishutaru) is a recurring demon in the series, based on Babylonian lore.

"Goddess of war and love, revered in ancient Mesopotamia. She seduced many men to their doom, but the hero Gilgamesh spurned her, causing her to murder his best friend Enkidu."
—Compendium Info

Ishtar is the Babylonian goddess of love and fertility, the Babylonian equivalent of the Sumerian goddess Inana. She is the personification of the planet Venus. Her father is uncertain, sometimes claimed to be the daughter of Sin, the moon god, or Anu, the sky god. She is also known as the "Lady of Battles" because she is known as a very violent deity. She is the creator of life and the guardian of life. Her symbol is the eight-pointed star, and her holy city is Uruk (or Erech). Uruk is a town of sacred courtesans - part of her cult was devoted to prostitution.

Ishtar's sister is Ereshkigal, the goddess of the realm of the underworld. Ereshkihgal cursed her sister, and Ishtar died. With Ishtar dead, the earth withered and would not produce, and neither animals nor human beings would bear young. With great effort, the water god Ea used magic to revive Ishtar, and Ereshkigal was not pleased. She demanded to trade her sister for someone else, finally deciding that her husband Tammuz would replace Ishtar for six months out of the year.﻿

Ishtar is the ruler of Binah. By bringing Astaroth to throne room in Binah, the player may seperate him into Ishtar and Majin Astarte. Ishtar explains that YHVH forced her to fuse with Astarte and become Astaroth long ago. This allows the player to create Ishtar with fusion afterwards.

Ishtar is the ultimate persona of the Lovers Arcana. This means that players must fully level up the Lovers Social Link (Rise Kujikawa's) and reach Level 71.

"The Akkadian goddess of love and war. She is known as the "Queen of Heaven" and is equated with the planet Venus.
In the epic of Gilgamesh, she had many lovers, but all were fated to be killed or turned into animals at her hands."
—Strange Journey Compendium 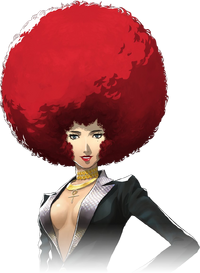 Ishtar takes the form of Trisha, or Midnight Venus (ミッドナイトヴィーナス, Middonaito Vīnasu), in the Japanese version. She is an attractive woman with a red afro who is the hostess of the various modes, including the Golden Playhouse (Golden Theater in Japan), the game's primary story mode. She provides an introduction to the game's modes and will text Vincent concerning his achievements in the Nightmare stages and provide him with hints. She also acts as commentary throughout the game. Players can make her reveal her identity and her role in the story if they do well enough, and completing the game's toughest challenge, the Axis Mundi of Babel, produces a cutscene where she breaks the fourth wall.

It is interesting to note that when Trisha lets her hair down, she looks facially similar to Nemissa, another character that Soejima designed.

Trisha, with her hair down

Trisha smiling
Add a photo to this gallery

Retrieved from "https://megamitensei.fandom.com/wiki/Ishtar?oldid=79862"
Community content is available under CC-BY-SA unless otherwise noted.