Ishtar is a demon in the series.

Ishtar is the Akkadian (and thus later Babylonian and Assyrian) equivalent of the Sumerian goddess Inanna and shares her roles as a goddess of love, war and fertility. Like Inanna, she wasn't considered a mother goddess, and few, if any, texts name any gods as her children. She is known as the "Queen of Heaven" and is the personification of the morning star (Venus). Her father is usually said to be Sin, the moon god, and she forms an astral trinity with him and her twin brother Shamash, the sun god. Other texts sometimes refer to Anu, Enlil or Ea (Enki) as her father. She is also known as the "Lady of Battles" because of her violent and warlike character. Her holy city was Uruk (or Erech). Part of her cult was thought to be devoted to temple prostitution, though despite Ishtar's sexual character, some modern researchers question this claim or the scope of such practices. Her symbols were the eight pointed star (originally simply a Mesopotamian symbol of heaven, but in later times only of the morning star), the lion and the dove. Like most Mesopotamian gods, art often depicts her wearing a horned crown, a symbol of divinity. She was commonly depicted as winged.

According to one of her most prominent myths, Ishtar's sister is Ereshkigal, the goddess of the underworld. When Ishtar descended to the netherworld, Ereshkihgal cursed her, trapping her among the dead. With Ishtar dead, the earth withered and would not produce, and neither animals nor human beings would bear young. With great effort, the water god Ea used magic to revive Ishtar, which displeased Ereshkigal. She demanded to trade her sister for someone else, finally deciding that Ishtar's husband Tammuz would replace her.

The epic of Gilgamesh states she had many lovers, but all were fated to be killed or turned into animals at her hands (Tammuz is described as turned into a bird with a broken wing rather than imprisoned in Ereshkigal's realm). When Gilgamesh had rejected her advances, she sent the Bull of Heaven, a sacred beast of the god Anu, to combat him. After he managed to vanquish the bull with the help of his companion, the wild man Enkidu, the gods decided to kill the latter to punish the pair for this transgression.

The historical King Sargon of Akkad was closely assciated with Ishtar. According to an epic poem about Sargon's exploits, she guided him to victory against his enemies, lead by the tyrannical ruler Nur-Dagan of Purushanda, who was advised by Enlil. Later Assyrian legends claim Sargon was born as an illegitimate son of a priestess and worked as a gardener before Ishtar decided to bestow kingship upon him. In his documents, Sargon frequently attributed his successes to Inanna/Ishtar, and his daughter Enheduanna wrote many hymns to this goddess.

Due to Ishtar's popularity, many cultures in contact with Mesopotamia either adopted her into their pantheons or conflated her with their local goddesses. The Canaanite goddess Astarte was her western counterpart, while Hittites and Hurrians sometimes used Ishtar's name to refer to their own war goddess, Shaushka.

Ishtar is briefly mentioned by Astaroth after his defeat, expressing his desire to regain the form of the goddess Ishtar.

Ishtar is the ruler of Binah. By bringing Astaroth to throne room in Binah, the protagonist may separate him into Ishtar and Ashtar. Ishtar explains that YHVH forced her to fuse with Ashtar and become Astaroth long ago. This allows the protagonist to create Ishtar with fusion afterwards.

Ishtar appears as the boss in three different versions of the gold level of the Ueno Mirage instance. Which variation appears depends on a player's actions through the instance. The first is triggered if no others are triggered. The second is triggered by using any of the Twilight-Colored Vases on the fountain before the boss room. Both of these instances share the same opening movie of a confrontation between Metatron and Ishtar. The difference in the boss rooms is simply that after defeating Ishtar in the second, Astaroth will spawn with more mobs.

The third variation can be triggered by summoning Astaroth as a demon partner in the dungeon, acquiring curses on him and seeking atonement from pillars along the route. After fulfilling all requirements for this route, the dungeon's music will change slightly. The final boss in this instance is a strengthened form of Ishtar with an increased amount of mobs. Unlike the first two variations of the instance, the boss video simply features Ishtar.

"The Akkadian goddess of love and war. She is known as the "Queen of Heaven" and is equated with the planet Venus.
In the epic of Gilgamesh, she had many lovers, but all were fated to be killed or turned into animals at her hands."
—Shin Megami Tensei: Strange Journey compendium

Ishtar can only be obtained through the unique password ISHTAR FIGHTS/TAMMUZ ANGELS.

Ishtar is the boss at the end of the Second Sphere of the Womb of Grief. Her focus is on wind spells, and she brandishes powerful attacks, like Garudyne, Magarudyne, Hamaon and Berserker God. When either side reaches +3 or -3 for buffs or debuffs, she will erase them with Silent Prayer. However, her most dangerous attacks are Alluring Squall and Soul Steal. The former hits random targets 1 to 3 times, with a chance of causing Charm. If anyone is successfully charmed, she will follow up with the latter move that instantly kills charmed combatants on top of healing her by their current remaining HP.

Hence, the most efficient means to defeat her is to field demons that, at minimum, are immune to Wind to prevent them from being charmed by Alluring Squall. The protagonist is best off with an armor that resists Phys (as Wind-immune armors are not available right after completing Sector Delphinus) while equipping the Stoic Ring for Charm immunity. Bring Electricity skills to exploit her weakness to trigger as many Co-Op attacks as possible.

After her defeat, Demeter appears and convinces her to hand over the 2nd Fruit. She then becomes unlocked for fusion, and requires a special fusion involving Skogsra, Virtue and Churel. The protagonist also obtains the Warped Horn, which is used to make the Demon Juicer Sub-App, giving him a greater chance of regaining used D-Sources.

The goddess whose revival is sought by Minako in the New Game Plus Challenge Quest, Ishtar, Goddess of Harvest. After obtaining Astaroth's soul in the earlier quest Prevent a Deal with an Overlord, Minako now seeks to incarnate Ishtar by collecting the souls of demons that come from her and using them to recreate her. Once Mother Harlot and Asherah's souls are collected, Minako sacrifices herself by eating a Red Pill, becoming the ancient goddess Ishtar.

Ishtar comes to fulfill her contract with Minako and make the land of Tokyo fertile, thanking Flynn for aiding Minako, who sacrificed body and soul to revive her and will keep her half of the promise. Ishtar asks Flynn to let her accompany him but can be declined, though she lets him know to call her whenever he needs her. The goddess disappears to make the land a more fertile place should Flynn say no.

Ishtar can teach Nanashi the Judgment, Hamaon, Concentrate and Samarecarm skills through her Demon Whisper. She benefits from learning Light, Almighty, Electricity and healing skills.

Ishtar is a Persona of the Empress Arcana. Upon being returned to the Velvet Room at MAX rank, she'll produce the Morning Star Totem needed to create Lucifer.

"Goddess of war and love, revered in ancient Mesopotamia. She seduced many men to their doom, but the hero Gilgamesh spurned her, causing her to murder his best friend Enkidu."
—Persona 4 compendium

Ishtar is the ultimate Persona of the Lovers Arcana. This means the protagonist must fully level up the Lovers Social Link (Rise Kujikawa's) and reach Level 71.

"The revered goddess of war and love in ancient Mesopotamia. She seduced many men to their doom. When Gilgamesh, the hero, spurned her, she murdered his best friend, Enkidu."
—Persona 5 background

Ishtar is the ultimate Persona of the Lovers Arcana and can only be obtained through fusion in the Velvet Room after completing the Lovers Confidant with Ann Takamaki. She is the only source of the Drain Wind skill and the first to learn the Insta-Heal skill. Ishtar also learns the Spell Master skill that halves SP costs and is one of the four Personas to learn Salvation. When itemized through an Electric Chair execution, Ishtar yields a Salvation Skill Card.

"A demon whose poise and charm can enslave even the strongest of rivals."
—Demonary, DemiKids

Ishtar has the Power Anti-Holy, which causes all Holy Type foes to flee from battle.

"A goddess of love and war, revered in ancient Mesopotamia. Also called the "Queen of Heaven", she was identified with the planet Venus. She seduced many men to their doom, but the hero Gilgamesh spurned her, causing her to murder his best friend Enkidu."
—Devil Survivor 2 compendium

Available in Fusion Pack Vol. 1, she is a special fusion of Dionysus and Lilim.

See also: The Ishtar article on the Catherine Wiki

"I'm a goddess with both mercy and cruelty. You saw another part of me in that nightmare."
—Ishtar (Trisha), Catherine

Ishtar takes the form of Trisha (an anagram of her name), also known as the Midnight Venus (ミッドナイトヴィーナス, Middonaito Vīnasu)?. She is an attractive woman with a red afro who is the hostess of the various modes, including the Golden Playhouse (Golden Theater in Japan), the game's primary story mode. She provides an introduction to the game's modes and will text Vincent concerning his achievements in the Nightmare stages and provide him with hints. She also acts as commentary throughout the game. Players can make her reveal her identity and her role in the story if they do well enough, and completing the game's toughest challenge - Axis Mundi, the final stage of Babel - produces a cutscene where she breaks the fourth wall. In Catherine, Trisha also uses the god Astaroth as her avatar while Vincent is in the confessional booth in between rounds of the Nightmare stages. 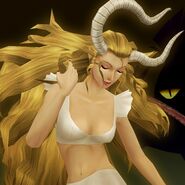 As she appears in Shin Megami Tensei IMAGINE

Ishtar as she appears in Shin Megami Tensei: Strange Journey

Ishtar in Persona 4 The Golden Animation

Ishtar in Catherine as Trisha

Ishtar in Catherine as Trisha 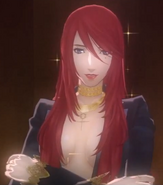 Ishtar in Catherine as Trisha with her hair down (Bonus Ending)
Community content is available under CC-BY-SA unless otherwise noted.