Isamu Nitta initially gives the impression of a lazy and smarmy individual, with a laidback and cocky nature. He is also characterized early on as being skittish and frightened when out of his comfort zone. He is also very fond of Yuko Takao, his teacher.

Along with Chiaki Hayasaka, Isamu and the protagonist agreed to meet in Yoyogi Park and later proceed to the Shinjuku Medical Center to visit their teacher Yuko, who has been confined there for a while. Due to his excitement, Isamu chides the protagonist of being late over the phone. He insists on the latter's immediate presence because Isamu feels that Yuko's demeanor towards him improves when her "favorite student" is around. Before hanging up, he reminds the protagonist to wear the jacket with the demon motif to set the mood for the visit, which is supposed to be a lighthearted and happy one.

Isamu and Chiaki get to the hospital first. He then starts looking for Yuko around the seemingly deserted rooms on the second level, darting around each end to make sure he didn't miss anything. Upon arriving himself and joining the search, the protagonist would invariably startle Isamu in one of the rooms. The latter expresses discomfort over Yuko being missing, as well the eerie atmosphere of the hospital. Isamu later shows up as Chiaki reads aloud the contents of an occult magazine she borrowed from the protagonist; about how a cult called the Cult of Gaea is trying to make Chaos befall the world (though what "Chaos" is supposed to be is extremely vague), and that a hospital in Shinjuku is tied closely to their plans. Isamu initially writes the report off as subscription bait, before recounting rumors he heard about Shinjuku Medical Center, of how it is under the influence of a cult that performs demonic rituals on patients, and how a psychic got scared and ran out of the hospital.

Isamu gives the protagonist an access card to look into the basement floor for their teacher, while the former would go to the higher floors once more. Chiaki pokes fun at Isamu and accuses him of being afraid to check the basement himself. The two boys would soon leave Chiaki by herself at the lobby to resume the search, unaware that the world as they know it would soon change.

Following the Conception, Isamu momentarily loses consciousness and finds himself in a white area, hearing a voice that tells him to "search for the truth." Isamu would wake up and find himself in a demon-infested hospital. Somehow, he is able escape from the building unscathed and would later end up in Ikebukuro, homebase of the Mantra demons.

As punishment for trespassing in their territory, Isamu is attacked and drained of Magatsuhi by Thor, one of Gozu-Tennoh's high-ranking minions. He is then thrown into the Mantra prison along with the Demi-fiend who was witness to the punishment being meted out. After winning his freedom in the Mantra's court of strength, the Demi-fiend will find the still-imprisoned Isamu in a lower level cell, determined to find and rescue Yuko but is not able to do anything. To that end, Isamu asks the Demi-fiend to do so in his stead.

After the fall of the Mantra, Isamu was able to escape and upon running into the Demi-fiend, expresses dissapointment that he was unable to find their teacher. While imprisoned, Isamu heard about a Manikin named Futomimi, who had the power to see the future. With that information in mind, he sets off by himself to Kabukicho Prison and find the seer Manikin to possibly gain clues regarding Yuko's whereabouts.

Upon reaching the prison however, Isamu is quickly subdued and locked up in the top-most floor by the Mizuchi jailer. The Demi-fiend comes to his rescue, freeing Futomimi and the other Manikins in the process. Isamu would be in the cell opposite Futomimi's with an Amala Drum in it. Instead of expressing gratitude, Isamu puts the Demi-fiend to task for always being too late to save him. He then resolves to do things on his own without depending on anyone, and was able to study the drum in his cell while in captivity. Isamu learns that it is a terminal to the Amala Network, and plans to use it in his quest to gain power so that he can start to fend for himself in this desolate world. He then teleports out of the prison.

Isamu is nowhere to be found afterwards, until Jyoji Hijiri, another survivor of the Conception, would find him taking up residence within the Amala Network. The Demi-fiend would then come to see him, but Isamu seemed different from what he was before in more ways than one. By being constantly exposed to large concentrations of Magatsuhi within the network, several wandering emotions have decided to inhabit his body, turning him into a pseudo-fiend that can survive in the Vortex World. Isamu would then air out his thoughts about the world he would like to create, which is one where people are free to be who they want without anyone helping or interfering. Back in the old world, Isamu was just another face in the crowd, who many people do not notice. Though saying that he isn't affected, Isamu sounds bitter about that fact. The Reason of Musubi comes into being, born from his strong desire to build a self-centered world.

Isamu would later ask if the Demi-fiend agrees with his sentiments on solitude. Should the latter contradict him, Isamu would put him down, saying that he is wasting his time being thrown here and there by forces who are manipulating him for their own ends. Isamu would then move to another region of the Amala Network and start collecting Magatsuhi so that his Reason would be adequately represented. While he doesn't call on supporters for his cause, several wandering spirits within the Amala Network would follow him, desiring a world of solitude as well.

When Hijiri becomes corrupted and tries to wrest control of the Amala Network, Isamu would indirectly abduct him by using the terminal in Asakusa to pull him in. Isamu would then detain Hijiri in the central part of the Amala Temple, luring the Demi-fiend to come to his rescue there. Using Hijiri as a hostage, Isamu makes the Demi-fiend liberate the three temples from Aciel, Skadi and Albion, the demon guardians who are blocking the flow of Magatsuhi to the center. Only then would Isamu be able to let him through to see how Hijiri is doing.

Depending on the Demi-fiend's current alignment, Isamu's reaction will vary after the three temples have been rid of the demons. He will either congratulate him for furthering their cause, or put him down for allowing himself to be used. Upon entering the central temple, the Demi-fiend will find Isamu and Hijiri inside, the latter held up by a vertical flow of Magatsuhi and being prepared as a sacrifice. As a follower of Musubi, Isamu would allow the Demi-fiend the honor of initiating the summoning ritual, but if he does not support the Reason, Isamu will start the ritual on his own, laughing at the Demi-fiend's misguided "nice guy" tendencies.

The ritual is completed after Hijiri falls into the pool of Magatsuhi, which in turn drains what he has in him, resulting in the complete disintegration of his body. The demon that Isamu would summon is a nameless god who had drifted through nothingness for eons, but he feels that it would be too troublesome for his demonic sponsor to remain nameless. He christens it as Noah, asking of it to help him grant the world of solitude that he longs for. Isamu would then assume a fetal position as he is enveloped by a red crystalline orb, which in turn makes him one with Noah. When the time of creation drew nearer, Isamu began his ascent to the Tower of Kagutsuchi.

If the Demi-fiend aligns himself with Musubi, then he would find that Noah has been defeated by Baal Avatar, mortally wounding Isamu in the process. In his last breaths, Isamu assures the Demi-fiend that things will be all right and that he should move on for the sake of the Reason they are fighting for. If the Demi-fiend is allied with other Reasons or does not uphold one, Noah will be his second opponent. He pities the Demi-fiend for coming all this way just to get killed, and promises not to hold back even on an old friend. After taking some hits, Isamu will express frustration over the Demi-fiend always getting in his way. In turn, Noah's front end would take the shape of Isamu's profile, flat cap included, and become stronger. If the Demi-fiend prevails, Noah will break down and the crystal that held Isamu within will partially shatter, the front end that assumed Isamu's profile would have tears of blood flowing down from the eyes. As he is dying, Isamu doesn't care what happens anymore and tells the Demi-fiend to just do what he wants, since his Reason is now meaningless.

Upon defeating Kagutsuchi, the Demi-fiend would see a message written on a stone tablet from the late Isamu, who relinquishes the responsibility of creating the world to the former based on his ideals of individuality, and hopes that he will be born again in a world where his life would no longer be dictated by anyone.

If the Demi-fiend returns Tokyo to its former state, Isamu will be among the many people reincarnated. He would be at the doorstep of the protagonist's room, urging him to get going so that they won't be late in meeting up with Chiaki at Yoyogi Park to possibly visit their teacher again in the hospital. 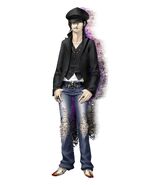