Isako Toriumi is a non-player character in Persona 3. She is a faculty member of Gekkoukan High School, and teaches Composition.

"All right, Kenji, you'd better not be sleeping back there! You should be ashamed of yourself, taking a nap while I pour my heart into reading this poem! For that, you get another essay along with your regular assignment tonight! I'll expect a slice of cake when you turn it in, too!"
—Toriumi demanding an extra essay and cake from Kenji

Toriumi is a laid back teacher who is often at odds with Mr. Ekoda, a classic literature teacher. She once made a "small error" in her gradebook and Ekoda got "all on her ass." Toriumi thinks Ekoda "thinks he's all that" because he teaches history. She also thinks Ms. Kanou is a "skanky hoe" and looks down on Kanou for stuffing her bra. She is good friends with Mrs. Terauchi during school days, even though she dislikes her for bragging with her husband all the time. Toriumi and Mrs. Terauchi occasionally play Mahjong together after work. Terauchi is only a novice at the game and Toriumi is teaching her Mahjong terminology, something which Terauchi is very excited about. However, from her descriptions of the games, it seems Toriumi is taking advantage of her inexperience and cheating to win. Supposedly, Toriumi has never lost a match.

She can be strict and serious at times, although she doesn't hide the fact that she must teach about authors who she isn't interested in. She comments that she is sick of her job because she has "no time to party T_T," although she wants to keep it anyway. When her students behave incorrectly, she constantly stops them by bringing up the fact that she will suffer the consequences as their homeroom teacher. She is extremely fond of cake and she at one point tells Kenji Tomochika that they need to bake her a cake to turn in with one of their assignments. Other teachers at Gekkoukan have mentioned they would bring her cake whenever they needed to talk with her so she'd be in a good mood. Although she loves nearly all cakes, she doesn't like Mont Blanc.

She is annoyed by her mother pressuring her to marry a man, and thinks the idea that woman can only be happy when they're "tied down" is sexist.

Toriumi drinks. At one point, she got drunk and passed out at Paulownia Mall. An "older man" called her a "drunk slut," and Toriumi told him to "shut the fuck up" in return. She is sorry for her class because they aren't of age to drink.[1]

In her free time, Toriumi browses the internet and plays video games online, especially MMORPGs. She also neglects grammar and punctuation online, makes many typos and uses many emoticons; she claims it's an online habit and she is lazy. She uses expressions such as "lmaonade," "roflcopter," "1337," etc. Toriumi is an avid player of an old MMORPG (known as Innocent Sin Online in the English version), and comments that most players left for the new MMO "CoW" (presumably a reference to World of Warcraft). She is quite confident in her gaming skills, and is annoyed to learn the protagonist is a low level "nub." She is not a fan of grinding.

Ms. Toriumi is the home room teacher of Class 2-F in Persona 3. She is a language teacher for the junior class at Gekkoukan High School.

The protagonist can form a Social Link (Hermit) with her after he receives a copy of the game, Innocent Sin Online from Junpei Iori. Unlike other Social Links, Ms. Toriumi is only available on Sundays and holidays. In addition, choosing to play the MMORPG uses up the entire day, not just the daylight portion.

Toriumi, using the handle Maya, convinces the protagonist to use the handle Tatsuya. "Maya" will also say "tell me if you find JOKER." "Maya" and "Tatsuya" talk through Toriumi's grievances at work, and she reveals that she has a crush on the protagonist, not knowing that he is one of her students. She is reluctant to follow up on it due to social taboos.

When Innocent Sin Online administration announces that the servers will all be shut down, she plans on sending her and the protagonist's chat logs to them in order to prevent them from shutting down the game. However, she decides not to as when reading over them, she only complained about her grievances and didn't want to have the game keep running so she can complain and tells the protagonist that she's quitting the game. Before she logs off, she leaves a message in the sand for him saying "i luv u" where the protagonist takes a screenshot of and makes it his background picture, unlocking the fusion of Arahabaki.

During the epilogue of the Social Link, the protagonist can go into the school's faculty office to find Ms. Toriumi. The protagonist drops his cell phone, which now has the background picture of Maya's message in the sand to Tatsuya. Ms. Toriumi picks it up and sees the picture, shocked and embarrassed to realize he is Tatsuya, and cries. She claims she will quit and never come back, then wishes she was dead. She does thank the protagonist for helping her turn her life around. Ms. Toriumi finds it within herself to accept the protagonist as the person she loves, and tries to ask him to dinner. However, she storms out of the office after saying "Oh, to hell with this!", flustered and embarrassed.

The player can also trigger the cellphone cutscene during the last parts of the game by completing the Hermit Social Link and completing a request from Elizabeth that concerns Mr. Ono.

Toriumi realizing the protagonist is her online boyfriend

Toriumi realizing the protagonist is her online boyfriend (2) 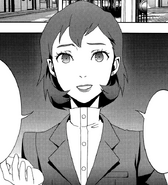 Toriumi in the manga adaptation