The Investigation Team (自称特別捜査隊, Jishou Tokubetsu Sousa-tai)? is a group of Persona Users dedicated to investigating the phenomena of the Midnight Channel and stopping the murder cases in Yasoinaba in Persona 4. They work independently from the police because they feel the police are inept, and revealing the Midnight Channel to the police could prevent them from entering the TV at Junes, potentially never catching the serial killer.

The team functions similarly to SEES of Persona 3, however, unlike SEES, the Investigation Team is founded as an independent group, with no sponsors nor advisor. However, one of the members, detective Naoto Shirogane, occasionally gets information from the police. Ryotaro Dojima and Tohru Adachi also sometimes spill the beans and give updates on the case. Additionally, unlike SEES or the Phantom Thieves of Hearts, the Investigation Team appear as normal people even when braving a dungeon, SEES being a sophisticated organization with distinct attires for missions, and the Phantom Thieves appearing in special outfits created by cognition when inside the Metaverse.

The Investigation Team's main objective is finding out the truth behind the murders at Inaba and the meaning behind the Midnight Channel.

The founding members of the Investigation Team are Yu Narukami, Yosuke Hanamura and Chie Satonaka, three students of Yasogami High School who awakened their Personas.

Much like how SEES becomes the Nyx Annihilation Team, the Investigation Team eventually becomes known as The Seekers of Truth (真実を追う仲間たち, Shinjitsu wo Ou Nakama-tachi)? if the protagonist chooses to continue searching for the real culprit, at which point it changes to represent the Judgement Arcana Social Link. Izanami comments the Investigation Team has become "drunk with truth" and that "knowledge of the truth is not everything."

If the protagonist maxed out Marie's Social Link before defeating Ameno-sagiri, an alternate sequence of events will occur.

After defeating Ameno-sagiri, Marie remembers she is actually Kusumi-no-Okami and the fog starts to absorb into her body. The fog inside her is slowly overpowering her and decides to make herself disappear when it gains control and starts to spread across the world once again.

She chooses to die to prevent this by going to the Hollow Forest, where she will kill herself and disappear. The protagonist decides to save her when he encounters her inside of a dream. With the help of Margaret, the Investigation Team decides to fight to free her from the fog's control by defeating her after the fog turns her into her true form. They succeed, gaining her a bond to the real world, allowing her to exist there permanently.

After combining with SEES from Persona 3, they undergo the alias "Team Yaso."

Rise was poisoned by the plants in the movie reality and the P4 hero ambushes the P5 hero and the two fight, but ended up on even hands. In reality it was merely a false alarm and neither parties were hostile, and they make friends with each other. The missing member, Yosuke was found to be defending a Herbivore Dinosaur from a Tyranniqueen, and joins the party when they were kicked out of the movie reality.

After returning back to reality from the final confrontation, Nanako greets the team for returning and a dinosaur movie begins to broadcast in the Dojima Residence TV. A dinosaur with Yosuke's head appears, but as their memories were wiped, they do not recognize him. The P4 hero and Nanako cook and they eat their dishes while watching the movie.

The members, arranged chronologically in the order of joining, are as follows:

The Investigation Team also often hangs out with Nanako Dojima and Marie, but they aren't technically considered official members.

The Investigation Team with Dojima and Nanako

Featured on the cover artwork for Persona 4 Official Design Works 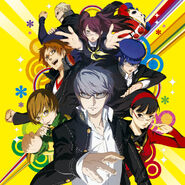 Remake group photo of Investigation Team with Marie in Golden

The Investigation Team in Persona 4 The Animation

Group Photo of Investigation Team during the Cultural Festival

Group Photo of Investigation Team with Nanako and Dojima

Group Photo with Marie after the quiz game

One of the group photos without Marie

The full Team at Junes.

The full Team at Junes.