An Innocent is a man-made humanoid designed to assist humankind and Devil Busters in keeping the post-Great Destruction world secure in Shin Megami Tensei IMAGINE.

While they are supposed to act only based on instruction and have little free will, certain Innocents have shown a capacity to think on their own, particularly ones stationed by the Obelisks located in Shibuya, Nakano, and Ichigaya.

Innocents also make up the core population of Protopia, the Neutral City. These innocents have shown that they have much more free will and more human complexity than most others. One comments "I'm glad I came to Protopia," which can lead one to assume that these Innocents were normal beforehand or possibly taken there due to special reasons. Another comments how he feels love and says "... I know it's not fake either, it's 100% real..." meaning that these Innocents are closer to human, possibly following the mold of Aigis from Persona 3, in that they originated as pure machine and programming but later became partly or even fully real humans. 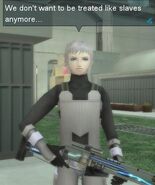 Azura, the only child-like Innocent.
Community content is available under CC-BY-SA unless otherwise noted.
Advertisement