Inferno is a demon in the series.

Inferno is the Italian and Portuguese translation for "hell." It can also be a destructive fire that threatens human life, animal life, health or property.

"A ghost who sends its hatred from the flames. Its name comes from the Italian word for Hell. It was given its name because its burning figure reminded people of the flames of Hell. There were those who stepped into the flames willingly... what kind of grudge did they have?"
—Shin Megami Tensei: Strange Journey compendium

Inferno appears in the "Hunter Tournament Prelims" Challenge Quest while acting as support for the third opponent that Flynn faces, Buzzsaw Sanya. It can later be encountered as a normal enemy in Ginza. Flynn will need the Demolingual App to recruit one. Alternatively, Inferno may evolve from Mou-Ryo once it reaches level 28. Inferno can teach Flynn the Fire Breath skill through its Demon Whisper. Once Inferno reaches level 35, it can evolve into Porewit.

Inferno can be found within the Sky Tower or evolved from Mou-Ryo at level 28. Inferno can teach the Fire Breath, Heat Wave, Agilao and Maragion skills through its Demon Whisper. This demon benefits from learning Fire and ailment skills.

Inferno appears in the first area of Illusory Daitou TV. It has 84 attack and 31 armor. When defeated, it may drop the Performa materials Inferno Force and Igniting Hellfire. 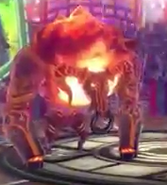 Inferno as it appears in Tokyo Mirage Sessions ♯FE
Community content is available under CC-BY-SA unless otherwise noted.
Advertisement