Indrajit or Meganada, is a demon in the series.

Indrajit, meaning Conqueror of Indra, was a great warrior that appeared in the epic of Ramayana as the son of Ravana, the king of Lanka. His original name was Meganada for the battle cries he made sounded like thunder. He was named Indrajit by Brahma when he defeated and humiliated the king of daevas Indra, of whom Brahma asked to be released, and in return granted Indrajit many celestial weapons, and the boon of invincibility.

"Origin: Sri Lanka. The son of Ravana, king of the Rakshasa. Originally known as Meghnad, he was a great warrior who defeated and captured Indra. As reward for freeing Indra, Brahma gave him the name Indrajit and an invincible body."
—Shin Megami Tensei A-Mode DDS Dictionary

After the protagonist defeats Ravana in the Tokyo Government Office in the Law or Neutral paths, a furious Indrajit immediately appears to avenge his father's death. He subsequently fails.

Indrajit acts as one of the five demons that controls the Pentalpha system. Players can align with him to fight against mobs representing the other demons within the system. Those fighting against him will face waves of demons belonging to the Earth Mother, Dragon God, and Brute races.

By acquiring enough power for him, players can obtain the ability to fuse him in a special fusion of Zouchouten and Rakshasa.

Known as Meganada, and one of the first two demons (Atma Avatar) transformed since the incident that blackened the sun. The identity of the host is not known. After his defeat, the Karma Society sealed him in a large lump of transparent material deep inside the EGG facility. From there, Jenna Angel extracted enzymes and produced the demon virus. Anyone injected with it may survive under the black sun and not become petrified by its malignant radiation. However, the virus' side effect is the ability to transform into a demon with an irrepressible desire to devour.

During Jenna Angel's uprising, she orders her followers to release Meganada in order to wipe out the Lokapala members who are defending the power plant entrance. Jenna finds her plan amusing, as it coincides with the myth of Meganada defeating Indra, Roland's Atma Avatar. In a suicide mission, Roland and Argilla overload the reactor, so the explosion kills Meganada along with them.

When the player party ascends to the Sun, Meganada's solar data blocks the last passage to God. His data is eventually eradicated and dissolved.

Despite occasionally calling out for Indra, unlike the boss battle against Agni, Indra's presence would not change Meganada's behavior script.

Indrajit as he appears in Shin Megami Tensei IMAGINE 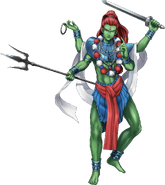 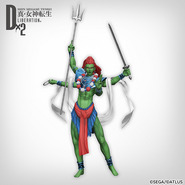 Indrajit as he appears in Shin Megami Tensei: Liberation Dx2

Meganada as it appears in Digital Devil Saga: Avatar Tuner 2
Community content is available under CC-BY-SA unless otherwise noted.
Advertisement