Incubus is a demon in the series.

An incubus is a demon in male form supposed to lie upon sleeping women in order to have sexual intercourse with them, according to a number of mythological and legendary traditions. Its female counterpart is the succubus. An incubus may pursue sexual relations with a woman in order to father a child, as in the legend of Merlin.

Religious tradition holds that repeated intercourse with an incubus or succubus may result in the deterioration of health or even death. In medieval times, the church would use incubi and succubi to explain sexual functions, which were taboo subjects.

"Origin: Germany. A male dream demon. It enters women's dreams to have sex with them there. They are said to take men's semen from Succubi to impregnate women."
—Shin Megami Tensei A-Mode DDS dictionary

Incubus appear in Ichigaya and Ikebukuro at night. They appear as support for the succubus field boss in Shinjuku Babel's docks area and as field bosses within Suginami's Diaspora instance. Incubus appears as the final boss in the Deranged Scheme questline, as an apex in his attempts to seduce a Pixie.

Two Incubi will be summoned by the Terminal Guardian of Ikebukuro, alongside a Kaiwan. After defeating the demons, Flynn and his fellow Samurai gain free access to the Terminal. Incubus later appears in Shibuya. It can teach Flynn the Zanma and Dream Needle skills through its Demon Whisper. Incubus can evolve into Succubus upon reaching level 37.

Incubus is also one of the demons summoned by Fusou Fujio in the second round of the "Hunter Tournament Finals" Challenge Quest.

"Originating in European folklore, the incubus is the male counterpart to the succubus.
It ravishes women while they sleep, impregnating them and causing nightmares."
—Shin Megami Tensei IV Apocalypse compendium

"Originating in European folklore, the incubus is the male counterpart to the succubus. It ravishes women while they sleep, impregnating them and causing nightmares.
Offspring born from such encounters are said to be evil spirits and witches. If one is possessed by an incubus, churches could perform purifications which could ward the incubus off."
—Devil Summoner: Soul Hackers compendium

"A demon originating in European folklore, the incubus is the male counterpart to the succubus. It ravishes women while they sleep, impregnating them and causing nightmares."
—Devil Summoner: Raidou Kuzunoha vs. The Soulless Army devil chart

Incubus begins appearing in the Shipbuilding Facility in Episode 10 as a random encounter.

"A male demon of European lore in medieval times. They visit sleeping women and have sexual intercourse with them; the resulting children become witches and wizards."
—Persona 4 compendium

Incubus specializes in imposing debilitating effects upon enemies. It can be obtained during Shuffle Time in both Marukyu Striptease and Void Quest.

"A male demon of European lore in medieval times. They visit sleeping women and have sexual intercourse with them. The resulting children become witches or wizards."
—Persona 5 background

Incubus is the first Persona of the Devil Arcana and can be found as a Shadow in Kamoshida's Palace and the Aiyatsbus area of Mementos, with the title "Bedside Brute." It is the first Persona to learn Life Drain, Evil Touch and Dodge Curse. When itemized through Electric Chair execution in the Velvet Room, Incubus yields a Dream Needle skill card.

Incubus initially appears as a Shadow in the third scripted battle of the game.

The Shadow of Mr. Kouta Magario will take the form of Incubus during the request "Daughter's Just a Meal Ticket" and can be found alongside the Shadow of his wife, Shadow Mrs. Asami Magario, in the third area of Adyeshach. He will lack a weakness to Gun and Bless skills in this fight. He will attack normally with Dream Needle, however should any party member be put to sleep from this or by Shadow Mrs. Magario's Lullaby skill, Shadow Mr. Magario will follow up by targeting party members who are asleep with the One-shot Kill Gun skill. This is usually lethal due to technical and the fact that this Incubus has abnormally high attack. When left at low HP, he will use Life Leech to rip away 150 HP from a party member to restore himself. This will be the total regardless of defenses or if the party member is guarding.

"A mischievous demon who feeds on the fear generated by nightmares."
—Demonary, DemiKids

Known as Inkubus, he can perform the combo Spark Bolt with Succubus. Inkubus also has the power Vixen Allure.

"Originating in European folklore, the Incubus is the male counterpart to the Succubus. It ravishes women in their dreams, impregnating them. The children between an Incubus and a human become demons or similar ilk."
—Shin Megami Tensei: Liberation Dx2 compendium 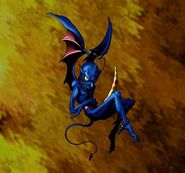 Incubus in Devil Summoner: Raidou Kuzunoha vs. The Soulless Army

Incubus in Shin Megami Tensei: Liberation Dx2
Add a photo to this gallery

Retrieved from "https://megamitensei.fandom.com/wiki/Incubus?oldid=399372"
Community content is available under CC-BY-SA unless otherwise noted.