(*Note: This is a legend from Shin Megami Tensei: Devil Summoner and has no historical parallels.)
There was a once an incident, or catastrophe/destruction, written in the history of the city of Hirasaka City is a lie initiated by the Yamato dynasty long time ago, during the war against Yamato and the country of Qin, which had a shamanistic matriarchy.

During the war in Hirasaka's field, the Qin country was commanded by the Hata family (who may be the ancestors of the Kuzunoha family) where magic existed. But as well as magic, they also have the ability to use daemons and create daemons of their own. Every generation of the Hata Family could do this.

The Great King of Yamato, Jimmu-Tennoh, under the guidance of the sacred bird Yatagarasu, sought to unify the land. The people of Qin refused to become a part of Yamato, and Jimmu-Tennoh declared war on the tiny country. Inaruna was unable to protect her country from the invading Yamato army, and Jimmu-Tennoh drove the daemons and ogres from the land, along with arresting Inaruna. For daring to stand against Jimmu-Tennoh, she was executed. As she laid dying, she burned her anger onto the world: The sorrow she felt for the people she could not protect, the anger she felt for the people of Yamato for destroying her country, and her own self-loathing.

With this occurring, her spirit did not move on, rampaging across the land of Yamato, destroying people, buildings, animals, mountains, anything that stood in her path. Only the combined forces of Yamato's most powerful were able to seal her away. A city was built atop her seal, and the guardians were appointed to watch over it.

Thousands of years pass, with each passing day Inaruna's hatred of the world grows. The purpose of the guardians fade from memory. It is said she will end the city if reborn.

Sid Davis is trying to use ancient magic to revive her, as she is foretold to end the world. To this end, he murdered Kyouji Kuzunoha and the protagonist. Throughout the game, there is an ancient civilization book written by Dr. Azuma that is often quoted. This book was most likely discovered by Sid. In it, it says the history of Inaruna and how to re-summon her.

Sid Davis finds this book, and begins his plot to resurrect her by destroying the seals which hold Inaruna back, but he also needs a vessel for her spirit to be channeled into. He finds one in the form of the last descendant of the Qin royal family: Kumiko Hatano - and the protagonist and Rei are tasked with defeating her and saving Hirasaka City.

After Inaruna is defeated, she thanks the protagonist for freeing her from the unsealed hatred that consumed her and returning her sanity. Afterwards, she leaves Kumiko's body.

Inaruna as she appears in the Shin Megami Tensei: Devil Summoner novel 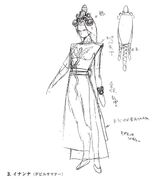