Inanna is a demon in the series.

Inanna, also known as Ištar, is the Mesopotamian goddess of love, war, fertility, games and the morning star. She is the daughter of the moon god Nanna, the twin sister of the sun god Utu, and the younger sister of Ereshkigal. Her Akkadian counterpart was Ishtar. While she was depicted as sexually active, with many hymns describing her encounters with Dumuzi, she was rarely presented as the mother of any other gods, and was never viewed as a mother goddess. That role was fulfilled by goddesses like Ninhursag instead in the Mesopotamian pantheon.

She was known as the "Queen of Heaven" and was the patron goddess of the Eanna temple at the city of Uruk, which was her main cult center. She was associated with the planet Venus and her most prominent symbols included the lion and the eight-pointed star. Like most Mesopotamian deities, she was usually depicted in a horned crown.

Inanna appears in more myths than any other Sumerian deity. The most famous among them include Inanna's descent to the underworld, describing her confrontation with Ereshkigal and subsequent rescue by her servant Ninshubur and Enki, the god of knowledge, and Inanna and Enki, in which she steals many me (a difficult to translate term referring to divine powers and attributes, among other things) from Enki's main temple in Eridug.

A part of Inanna's spirit first appears after Toki faints, sealing the last of Maitreya's pots guarded by Marici. She attacks the group, wanting to reclaim the power that Danu stole from her. After the battle she returns to Toki, who she is sealed inside of.

Once the Cosmic Egg is complete, the Divine Powers release her and she takes control of Toki, revealing that Krishna has promised to let her birth the new humanity in the universe they plan to create. While Toki's personality asserts itself, Inanna quickly takes control of the shared gestalt between them and sends her host into a delusional state where she becomes obsessed with having Nanashi's children. She believes that the reincarnations of members of the Divine Powers, including Maitreya, Inanna is rebirthing through her are her and Nanashi's offspring. She summons Beelzebub, Seth, and other demons to guard the Egg.

The party confronts Inanna on the 4th floor of the Cosmic Egg. She possesses a wide range of elemental attacks and initially resists all non-Almighty magic, but her signature Raging element skills leave her weak to its opposing element. Bring a good mix of elemental magic to score free Press Turns on her. During the fight, Toki's consciousness begins vying for control over her body, and this causes Inanna to falter. It will create extended boss dialogue during the battle, with several opportunities to attack Inanna while her guard is down. Choosing not to attack and to listen to the entire dialogue sequence can have differing effects on Inanna and the party. The same happens when Inanna begins arguing with Nozomi and Danu over the use of her power. After her defeat, the remains of Inanna's power is separated from Toki. Danu seals Inanna's power within Nozomi for good, awakening new power within the current Fairy Queen, and preventing Toki from losing control again.

Defeating Inanna also gives the Goddess Feather. When brought to the shop at Kasumigaseki, the player gains access to the Garment of Hope armor set.

Maria transforms into Inanna if the protagonist chooses to recreate the world to save Tokyo. Defeating her unlocks her for fusion. Inanna has multiple signature skills, that being of the Raging Element series, a powerful Fire/Ice/Electric/Force attack against one opponent. 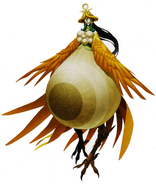 Inanna as she appears in Shin Megami Tensei IV Apocalypse 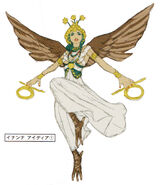 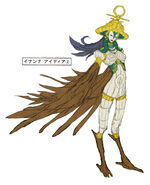