Illuyanka is a demon in the series.

Illuyanka was a serpentine dragon in Hittite mythology that was slain by Tarhunt, the Hittite incarnation of the Hurrian god of sky and storm. It is known from Hittite cuneiform tablets found at Çorum-Boğazköy, the former Hittite capital Hattusa. The context is a ritual of the Hattian spring festival of Puruli.

The myth is found in Catalogue des Textes Hittites 321, which gives two consecutive versions. In the first, the god Teshub successfully kills Illuyanka. In the second, Teshub loses instead, and Illuyanka takes his eyes and heart as proof of victory. To retrieve them, Teshub has his son Sarruma marry Illuyanka's daughter and ask for the return of the eyes and heart as a wedding gift. Restored, Teshub again challenges Illuyanka and is triumphant. However, Sarruma realizes he was merely used, and as the dragon dies, he demands his father destroy him as well. Teshub complies, killing Illuyanka and Sarruma with a raging storm.

Kaneko's design for Illuyanka's mask draws inspiration from The Phantom's beaked mask in the 1974 film Phantom of the Paradise, also a possible inspiration for Griffith's mask as Femto.

"An dragon god that appeared in ancient Hittite legend. A violent god, he rules the sea. In many cultures around the ancient Orient, the rough waters and the river floods were often likened to dragons. There are many legends about him, including a time when he fought the main god, the god of storms, in which he showed power greater than his opponent."
—Shin Megami Tensei IV compendium

Illuyanka is faced in the Challenge Quest, Slay the God of Violent Winds. Having defeated and stolen the heart and eyes of the God of the Storm, he resides in the area of Akasaka on the world map in Infernal Tokyo.

Illuyanka can be found in Minami Sunamachi. It can teach Nanashi the Bufudyne, Megaton Press and Mazanma skills through its Demon Whisper. Illuyanka benefits from learning Ice, Force and Physical skills.

"A serpentine dragon god who ruled the seas in Hittite mythology. In ancient Near Eastern civilizations, the rough waters and river floods were often thought to be caused by mighty dragons such as Illuyanka. There are many legends about him, including a time when he fought the god of storms, showing greater power than his opponent."
—Shin Megami Tensei: Liberation Dx2 Demonic Compendium 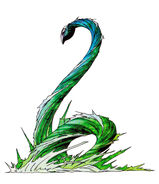 Illuyanka as he appears in Devil Summoner: Soul Hackers

Illuyanka as he appears in Card Summoner
Community content is available under CC-BY-SA unless otherwise noted.
Advertisement