Ifrit is a demon in the series.

Efreets (عفريت, "strong one") are considered a type of jinn that were typically portrayed as spirits of fire in Arabic mythology. The Efreet is the second most powerful form of jinn after the marid. It is written in the Qur'an that when King Solomon asked all the creatures who could bring back the throne of the queen of Sheba the fastest, an Efreet represented the jinn and boldly stated that he was best suited to the task. However, he was outperformed by means of a prayer.

In popular culture, Efreets (better known as Ifrits) are powerful spirits that embody fire. They generally consider themselves superior to all other races because of their age and deeply resent that humans have found a way to mystically control them. When summoned, they will do the bidding of their master but will often try to twist their wishes to do harm to others.

They are well known for their appearance in the book Arabian Nights.

"A spirit of Arabic mythology that can control fire. It is said that it will do its summoner's bidding, but will burn those it doesn't like to ashes."
—Shin Megami Tensei III: Nocturne profile

Efreet is obtained by either evolving Jinn when he has reached level 48 or by recruiting them through conversation. Efreet cannot be obtained through fusion. An Efreet obtained through evolution will not have access to the Agidyne skill, but can retain the Taunt skill should Jinn possess it when it evolves.

Should the Demi-fiend reach the end of the cursed hallway in the Second Kalpa of the Labyrinth of Amala and descend the ladder before the curse is removed, an Efreet residing in the room will reward him with 250,000 macca. After removing this curse by defeating Beelzebub, the Efreet will tell the Demi-fiend about the Star Key in Loki's possession.

Ifrit appears as one of the three minibosses during the Lord of the Flies quest. Players can obtain the ability to fuse him through a quest given by the Cathedral Master in Shinjuku Babel. His fusion is a special double-fusion of Pyro Jack and Jinn.

"A powerful fire spirit in Arabian lore. The Efreet will bring great fortune to those whom in deems worthy. Thouh it is easily upset and will crush its summoner if irritated. It is well known for its appearance in the book "Arabian Nights"."
—Shin Megami Tensei: Liberation Dx2 compendium

Ifrit as he appears in Megami Tensei II 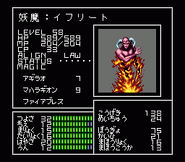 Sprite from the Sega CD remake of Shin Megami Tensei