Hsing-Hsing is a demon in the series.

Hsing-Hsing, also known as Shōjō, is a sea spirit from Chinese lore. He has a red face, hair and a fondness for alcohol. One story has them giving a boy the sake that can heal his father, with a neighbor stealing some of it and being poisoned since he wasn't pure of heart. Its name is another word for orangutan.

"A monkey-like creature that can speak human languages in Chinese and Japanese folklore. Judging from their red faces, it is believed they like liquor, and can be easily captured by getting them intoxicated."
—Shin Megami Tensei: Strange Journey compendium

Hsing-Hsing can be found in Midtown. It can teach Flynn the Binding Claw and Sukukaja skills through its Demon Whisper.

A pack of thirteen Hsing-Hsings appear in the New Game Plus Challenge Quest, Catch the Sake Thief. They are stealing the people of Blasted Tokyo's limited sake for themselves. They appear in waves during the battle, with two in the first wave, three in the second and four in the third and final waves.

Hsing-Hsing can teach Nanashi the Binding Claw, Sukukaja and Taunt skills through its Demon Whisper. It benefits from learning Physical and support skills. 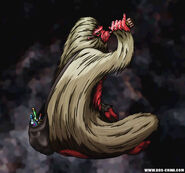