Horus is a demon in the series.

Often identified with the sun, Horus (also known as Her, Heru, Hor or Har) was known as one of the most powerful gods of the Egyptian pantheon. He is the falcon-headed sun god and the prince of Egypt. Horus was occasionally shown in art as a naked boy with a finger in his mouth sitting on a lotus with his mother. In the form of a youth, Horus was referred as Neferhor, Nephoros or Nopheros (literally known as Good Horus). He is the son of the god Osiris and Isis, seeks revenge for his father's death at the hands of the god Set.

He is most famous for his battle with the god Set for supremacy; The gods passed judgment on the battle between Horus and Set, ultimately favoring Horus as the god of day. It is said that he and Set have a never-ending battle, and when the sun rises, Horus begins to triumph, but when the sun sets, Set gains the upper hand. During these battles, Horus loses an eye until it is restored by Thoth. Thus, the "eye of Horus" symbol in Egyptian art represents healing.

Since Horus was said to be the sky, he was considered to also contain the Sun and Moon. It became said that the Sun was his right eye and the Moon his left, and that they traversed the sky when he, a falcon, flew across it. Later, the reason that the Moon was not as bright as the Sun was explained by a tale, known as "The Contendings of Horus and Seth." In this tale, it was said that Set, the patron of Upper Egypt, and Horus, the patron of Lower Egypt, had battled for Egypt brutally, with neither side victorious, until eventually, the gods sided with Horus. As Horus was the ultimate victor he became known as "Horus the Great", but more usually translated "Horus the Elder". In the struggle, Set had lost a testicle, and Horus' eye was gouged out.

Horus the Younger, Harpocrates to the Ptolemaic Greeks, is represented in the form of a youth wearing a lock of hair on the right of his head while sucking his finger. In addition, he usually wears the united crowns of Egypt, the crown of Upper Egypt and the crown of Lower Egypt. He is a form of the rising sun, representing its earliest light.

The pharaoh of Egypt was also thought to be the human personification of Horus or his son, and was responsible for maintaining Ma'at, or balance, in Egypt. When the pharaoh died, he became the embodiment of Osiris.

Horus appears as a demon of the Deity Race. Aleph can recruit him after reaching Level 37 or above.

"An ancient god of Egypt known for having the sun and moon as his watchful eyes.
He was revered by some as the principal god, most likely due to his association with the celestial bodies above. Myth often depicts him as a hawk or a falcon."
—Shin Megami Tensei V lore

Horus is a demon of the Deity race and can be obtained as an ally through fusion.

Horus can be found as a punishing foe soaring over Sotokanda. Isis will ask the protagonist to bring her Horus' head during the "The Falcon's Head" subquest, saying that he has been rampaging through the area, and needs his head for his rebirth before he completely devolves. Horus can be reached by climbing to a cliff with a treasure chest containing a Chakra Pot in the Suehirocho area. He will briefly stop here each time while circling the area. In battle, Horus will use Mahamaon following the turn he uses Omagatoki: Critical.

"An ancient god of Egypt whose eyes are the sun and moon. Revered by some as the chief god, and often depicted as a hawk or falcon."
—Persona 3 compendium

Horus appears as a Persona of the Sun Arcana. He is available to be summoned once the protagonist reaches Lv. 63 or above.

Horus returns as a Persona of the Sun Arcana, retaining his attributes. In the playable epilogue of FES, titled The Answer, Aigis can also summon Horus by fusing the appropriate Personas in the Velvet Room.

Horus returns as a Persona of the Sun Arcana . He is available to be summoned once the protagonist reaches Lv. 68 or above. Alternatively, Horus can also be obtained via Shuffle Time.

"An ancient god of Egypt whose eyes are the sun and moon. Revered by some as the chief god, he is often depicted as a hawk or a falcon."
—Persona 5 background

Horus is a key ingredient in the last fusion required to complete the Strength Confidant with Caroline and Justine. The protagonist can fuse the Lachesis and Neko Shogun from earlier requests to summon Pazuzu, then fuse Pazuzu with a Dakini that has learned the High Counter skill to pass it on to Horus. An advanced fusion recipe utilizing Isis, Thoth, Anubis and Horus can then be completed to summon Seth with the High Counter skill.

Horus appears as a random encounter high up in the Karma Temple and as the only enemy in a secret area of the Brute's Base in Ajna. One of its weaknesses is gunfire.

Horus is also one of the few rare enemies that drops Noises (Data Nodes in the original Japanese version). In this case Horus drops Magic Noise, offering a +2 increase to the user's magic stat in some locations.

Horus returns as a late game normal enemy encounter. He is encountered in the final dungeon, the Sun. Once again, he has a chance of dropping items that offer a +2 increase to the user's magic, in this case Magic Data.

Horus is a boss in the game, serving as an agent of the angels. He attempts to kill Masaki Kuzuha because of his nature as a Devil Child, viewing it as unclean along with the fact that those with the same power have proved troublesome for the angels in the past. After the fight, he is surprised at his own defeat and dies.

"Immortal demon with a falcon's head. Its eyes harness the powers of both sun and moon."
—Demonary, DemiKids

Horus can perform the combo Pyramid with Anubis and Osiris.

"The Egyptian god of the sky. The son of Osiris and Isis, he represents the falcon and other great symbols. In certain areas and eras he is recognized as the sun or the chief of the gods."
—Shin Megami Tensei: Liberation Dx2 compendium 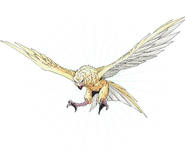 Horus as he appears in Shin Megami Tensei III: Nocturne

Horus as he appears in Persona 5 Royal 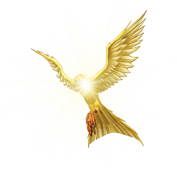 Horus as he appears in Persona O.A.