Horkos is a demon in the series.

In Greek Mythology, Horkos is a personification of a curse that will befall anyone who swears a false oath or breaks an oath they had taken. He was also the god of death, karma and justice. His Roman counterpart is Orcus.

He is the son of the goddess Eris, and brother of Ponos, Limos, Algea, the Hysminai, the Makhai, the Phonoi, the Androktasiai, the Neikea, the Pseudologoi, the Amphilogiai, Dysnomia, Ate and Lethe. Hesiod states that the Erinyes assisted at the birth of Horkos, and that the fifth of the month was especially dangerous as being the day on which he was born. However, there is no fixed day on which the god’s punishment falls on the wicked.

During medieval times, he was depicted with the head of a pig who ravaged corpses, most likely because sacrifices to him used pigs. Horkos was thought to be the king of the Orcs.

"A god of death originating in Greek lore. During medieval times, he was depicted as a demon with the head of a pig who ravaged corpses, most likely because sacrifices to him used pigs. Horkos was thought to be the king of the Orcs."
—Shin Megami Tensei: Strange Journey compendium

Horkos appears as the strongest demon in Sector Carina. He fuses himself with the damaged remnants of the Elve, and with its energy shields becomes able to shrug off all damage, leaving him unscathed. Mastema offered to create the Shibboleth to help them, which will damage his ability to devour the Elve's energy, from two demons (any Megami demon along with any Wilder demon), but states it would need further augmentation to pierce the Elve's shields.

The protagonist creates the Horkos Buster, a plasma cannon tailored to flush Horkos out of the Elve's systems, leaving him vulnerable to physical damage. Infuriated from the loss of the Elve, he later attacks the Red Sprite with the full intention of absorbing it as he had done to the Elve. He was repelled by the Red Sprite's energy shields and forced to evacuate via Carina's Sanctum System to his lair. Pursued to the depths of Carina, Horkos is slain by the hand of the protagonist, cursing humans for their limitless hunger, which exceeded even his.

Horkos is revived in Sector Fornax by Mother Tiamat; Even after taking his true form Orcus, he still lost. At his death, the Red Sprite's crew recovered his rare forma and Sector Carina's Rosetta. Horkos calls himself "a great prince of Hel" at the first encounter, and repeatedly screams "BUONO!"

During the battle against him, Horkos uses Grocery Run to summon a Katakirauwa. After the Katakirauwa sustains enough damage, he will use Binge Eating to kill it before the party can, while healing HP proportional to his ally's HP at the time of use. Horkos also inherits the status ailments of the allies he swallows. Whenever Horkos chooses to, he can use Taking a Bite, an attack similar to Life Drain. The Katakirauwa is also susceptible to Charm, and if it is eaten while charmed, Horkos will also become charmed, allowing for several rounds during which he will attack himself. He is a special fusion that's unlocked after his defeat.

Horkos can be found in Shinjuku West Entrance Park. He can teach Flynn the Megaton Press skill through his Demon Whisper. Horkos can also be found later in the initial areas of Blasted Tokyo.

"A god of death originating in Greco-Roman lore.
In those days, he was depicted as a demon with the head of a pig, most likely because sacrifices to him commonly used pigs."
—Shin Megami Tensei IV Apocalypse compendium

Horkos can teach Nanashi the Critical Wave and Megaton Press skills through his Demon Whisper. He benefits from learning Physical attack skills.

"A demon in Greek mythology, and king of the vile Orcs. In the middle ages pigs were often used in animal sacrifice, which may be why he is often depicted with a hogs' head."
—Shin Megami Tensei: Liberation Dx2 compendium

Horkos as he appears in Last Bible Special 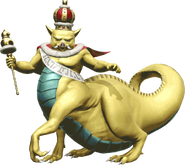 Horkos as he appears in Shin Megami Tensei: Liberation Dx2