Leader of the Samurai

Richard Epcar
"A Samurai is bound to uphold not a set of rules, but the will of the people."
—Hope, Shin Megami Tensei IV

Hope is a character from Shin Megami Tensei IV.

Hope is a strict man when it comes to the Samurai's mission, but he is not one who will be tied down by rules. He cares for his troops and has the well-being of the people as his top priority. He shows some contempt for the Abbey that is run by Hugo.

Hope is the leader of the Samurai, and assigns initial training missions for the fledgling Samurai prentices. He has them slay a demon, recruit a demon and find a woman’s ring guarded by a demon. After successfully completing all three, Hope asks for the ring back from Flynn. Following this, Flynn can talk to an NPC Samurai to learn that the woman’s ring most likely belonged to a woman Hope loved, who he was separated from after he became a Samurai.

When the four prentices fail to convince a Master Samurai to grant them leave for an expedition to Kiccigiorgi, Hope arrives and allows them to, after learning Flynn was born there. After discovering a few survivors had fled into the Kiccigiorgi Forest, Hope instructs the prentices to search for them, and updates their mission at certain intervals. He watches the prentices encounter with the Black Samurai, and wants to meet the group himself in order to hear their own take on the encounter. After learning what they know, he orders the healers to stay for the injured survivors, while the rest return to Mikado Castle.

The next morning, he orders the Samurai to meet in Aquila Plaza immediately. When he attempts to speak he is interrupted by Hugo, who tells the Samurai what to do while he remained silent. Another Samurai suggests that he is more upset than he is letting on, and must attend an all night meeting with Hugo and Gabby afterward.

After the Black Samurai's capture, he apologizes to Hugo for Walter's bad manners; he later confides in Walter that he shares his views. He is pleased that the prentices were able to do such a great deed and get the Third Order of Merit, but is angry that even with her death, the Black Samurai's disciples were also executed and her words continue to haunt the country.

He scours the kingdom after consulting with Gabby for traces of the Black Samurai in the kingdom, and has been meeting her behind Hugo's back to talk about the mission, being impressed by her strong convictions. Before choosing to side with Walter or Jonathan, he will admit that he envies Walter since Hope's station makes it so he can't speak out against the system that had him leave his fiance to become a Samurai. After joining a side, he mentions that the Samurai are hunting down Luxurors who fled the castle and the Black Samurai's remaining disciples, hoping that this will be the last tragedy as it burdens his mind to do such acts.

In the Chaos route, he tells Flynn that he saw him emerge from Naraku with a flaxen-haired girl and eventually the swarm of demons that emerge from there. He does not fear the demons, but rather fears he forged the worst threat to the kingdom with his own hands.

In the Law route, Hope will say that it pleases him to see things the way they are now, and hopes that he will live long enough to see the Samurai disband.

In the Neutral ending, Hope will try to cheer Flynn up after having defeated Merkabah, which in turn kills Jonathan. He says that choosing one's friends gets important as you get older, as you would have less time to spend with them and would need to stay with the ones you felt more comfortable with. He will later reappear at the entrance to Club Florida after Flynn has recovered the Great Spirit of Spite, praising how much he has progressed and then telling him that everyone is waiting inside.

He appears in a minor role in the Explosive Epidemic on Mikado DLC. After Nanashi defeats the Samurai guarding the Wailing Gate, Hope intercepts him, transforming into a demon before attacking. He explains the Mikado citizens have been changed into a new breed of humanity, rebuilt by God. Now part human and part angel, the new people cannot reconcile with the Tokyo natives.

As he falls, he asks how a celestial being like himself could fall to Nanashi, before shaking it off and saying the spread of the Demon Gene is unstoppable. With his last words, he directs Nanashi to the Monastery, where Hugo, the source of the epidemic, awaits.

Hope as he appears in Shin Megami Tensei IV -Prayers- 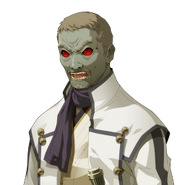