Reality within the Midnight Channel

Yomotsu Hirasaka
"This is the Hollow Forest. The "closed realm" created by her in the TV world, the "world of the human mind...""
—Margaret, referring to Marie, Persona 4 Golden

Hollow Forest is a dungeon exclusive to Persona 4 Golden, only available after completing the Aeon Social Link (Marie) before defeating Ameno-sagiri and if the protagonist asks Margaret to locate Marie.

"The place that gave birth to those who answer the "desires" and "wishes for lies" of humans... was that it?"
—Naoto, Persona 4 Golden

The Hollow Forest is Marie's reality within the Midnight Channel, created when she enters the TV world after regaining her memories. The Investigation Team is first taken to the Hollow Forest on February 12 by Margaret, who explains that she has formed a unique path between the TV in the cottage storage shed and this world, after finally locating Marie's whereabouts. Margaret informs them that Marie has sealed herself into this dungeon for reasons unknown, and also explains that this world is currently on the verge of collapsing. Therefore, if the team does not save Marie quickly, she will disappear along with the Hollow Forest, and all memories of her will disappear from everyone's minds.

The Hollow Forest takes an appearance similar to Yomotsu Hirasaka, as a world apparently shrouded in fog. However, there are bits and pieces of the real world seen throughout this dungeon, such as Junes signs and benches, along with haniwa and ancient Japanese artworks. This represents Marie's origin, as a spirit from ancient Japanese times, as well as her hidden desire to stay in the real world. Each of the Hollow Forest floors are named "Memories" - Memories of Parting (1F), Pain (2F), Grief (3F), Sorrow (4F), Love (5F), Suffering (6F), Anger (7F), Loneliness (8F), Invitation (9F) and Meeting (10F).

Unlike the other dungeons in the game, the Hollow Forest features several special restrictions while traversing the dungeon:

On the floors Memories of Parting (1F), Sorrow (4F) and Anger (7F), the party might encounter Shadows when breaking the "seals" to continue. Shadows may also appear from both regular chests and locked chests. Also, there are two "mini-bosses" that the party must face prior to the final boss, instead of the usual one.

After Marie is rescued, the dungeon begins to disappear as it no longer needs to fulfill its purpose. When the party escapes through the TV connected to the dungeon, its screen shatters.

Party in front of a Hollow Forest door.

Path to the boss.

Battlefield in the Hollow Forest. 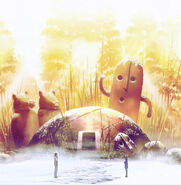