Hokuto Seikun, also known as Beiji Weng, is a demon in the series.

Hokuto Seikun is the Japanese name for Beiji Xian Weng (北極仙翁) also known as Bei Dou Xing Jun (北斗星君) or its full name, Beifang Beiji Zhong Tian Zi Wei Dadi (北方北極中天紫微大帝). He is a deity in Taoism who administers the life and death of a person, and judges their actions in life which he then use to decide whether one goes to heaven or hell. Also known as the Lord of the Northern Hemisphere, Wise Man of the North Star or the Big Dipper. In other verses, he appears as a strict old man wrapped in icy robes, and is the opposite of Nan Dou Xing Jun (南斗星君), a mild-mannered youth wrapped in fiery robes.

The ability to fuse Beiji Weng is a reward to players for recording 90 demons within the compendium. He is a special triple fusion of Mot, Chernobog and Hel. His initial implementation retains placeholder resistances-- poor resistances that demons that have yet to be implemented usually possess. This was never directly corrected by the developers, who instead offered an upgraded variation that could be obtained in-game. By gathering seven Authentic Records of Hell and turning them in to the researcher in Ikebukuro's Cathedral of Shadows, players are able to fuse the variation Seven Stars of Death Beiji Weng with a regular Beiji Weng and a Qing Long. This variant has proper resistances (including a weakness to fire) and learns a special ice affinity rush skill-- Absolute Zero Sword.

Beiji-Weng can teach Nanashi the Glacial Blast, Recarm and Cold World skills through his Demon Whisper. He benefits from learning Ice and healing skills.

Hokuto Seikun and Nanto Seikun are fought together in the Alien Dimension dungeon.

"According to Chinese myth, Hokuto Seikun, or "Wise Man of the North Star," determines the moment that one is born."
—Persona 4 Compendium

"The Taoist deification of the Big Dipper. He governs death and judgement.
He is said to be an ugly old man cloaked in a robe as transparent as ice. He handles the fortunes and misfortunes of people's lives, but is known mostly for judging the fate of the deceased."
—Devil Survivor 2 compendium

"The Taoist deification of the Big Dipper. He governs death and judgment. He handles the fortunes and misfortunes of people's lives but is known mostly for judging the fate of the deceased. He is especially feared by those who know they have sinned."
—Shin Megami Tensei: Liberation Dx2 Demonic Compendium

Beiji-Weng as he appears in Shin Megami Tensei III: Nocturne

Beiji Weng as he appears in Shin Megami Tensei IMAGINE

Hokuto Seikun as it appears in Card Summoner 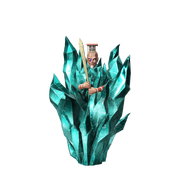 Beiji Weng in Shin Megami Tensei: Liberation Dx2
Add a photo to this gallery
Retrieved from "https://megamitensei.fandom.com/wiki/Hokuto_Seikun?oldid=386035"
Community content is available under CC-BY-SA unless otherwise noted.