Hitomi has natural upper-back length brown hair that has a red clip on the right side and brown eyes.

She wears a red vest over a white dress shirt, a brown cargo mini-skirt with black tights underneath, and black calve length platformed boots with white knee length socks.

Hitomi is a shy girl who is technically skilled, but she is somewhat unsure of herself and she tends to get in fights with Nemissa since she is forced to share her body with the demon which happens less as time goes on.

Hitomi is the protagonist's best friend and like him is a member of the Spookies. Her father is working in America, and she is living by herself. She is also friendly with the rest of the protagonist's family, his mother inviting her to stay for dinner and his sister being especially fond of her. She accompanies the protagonist and is eventually possessed by a demon known as Nemissa. Although she has no control over her body, she can still come out to speak with Nemissa or the Protagonist, and gets in arguments with Nemissa.

As time goes on, her soul begins to dissipate due to Nemissa's presence, and becomes unable to speak with the others. In the ending, Nemissa sacrifices herself to destroy Manitou - and save Hitomi. During the epilogue, while various members of the Spookies part ways, Hitomi reveals she is going to America to see her father, and recalls Nemissa had told her "we'll see each other again soon."

The original artwork of Hitomi Tono 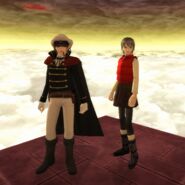 Dr. Victor and Hitomi's outfits in Shin Megami Tensei IMAGINE
Add a photo to this gallery

Retrieved from "https://megamitensei.fandom.com/wiki/Hitomi_Tono?oldid=388401"
Community content is available under CC-BY-SA unless otherwise noted.