Hiroki Sugimoto is a character in the Persona series.

"The new Leader of Cuss High. Seems to have been plotting revenge against Eikichi since his humiliation in middle school."
—His introduction, Persona 2: Innocent Sin

Hiroki is a minor character within the Masked Circle who works to usurp Eikichi Mishina's position as the Boss of Kasugayama High, calling himself the Leader. Due to a rumor circulating that the Leader is stronger than the Boss, Eikichi's attacks will have no effect on him. He wants revenge for Eikichi pulling his pants down in middle school, believing that had made his girlfriend dump him (in reality, she had left him because she disliked Hiroki picking on the weak).

If the party chooses to help Eikichi rather than allow him to deal with the situation himself at the Club Zodiac, he will confront the party using the Reverse Rhadamanthus Persona. If they allow Eikichi to confront him unmolested, he will merely renounce his own title and beat up Sugimoto with little effort (this happens because when Yasuo spread the rumor, he referred to Eikichi by his title instead of by name, so Eikichi can defeat him by rescinding it). Having proven he's a miserable loser, Sugimoto will confess Yasuo Inoe's role in the spreading of the rumors.

Now without memories of the Other Side, Sugimoto will once again be a loser longing for revenge against Eikichi. However, Sugimoto is abducted for using the Joker Curse on Eikichi to the lab for research purposes in Kei Nanjo's route.

Once found, due to the removal of his Kegare, he will have degenerated into a monster. Eikichi, ironically, though having no love for Sugimoto, will break into the research lab where he is being held out of sheer responsibility to protect him as the Boss of Kasugayama High. Nanjo assures him he will ensure the Nanjo Group will do everything in their power to restore Sugimoto following his defeat.

Prior to being kidnapped, Hiroki can be found in front of the entrance to the Bomb Shelter in Kasuyagama High School, plotting to himself. 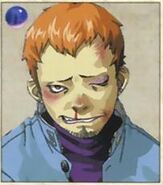 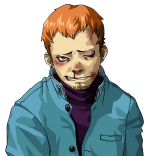 Sugimoto after being beaten 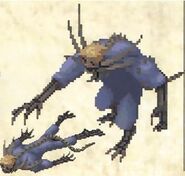