Hinokagutsuchi is a demon in the series.

Hinokagutsuchi, also known as Kagutsuchi and Homusubi, is the god of fire in Japanese mythology. His mother Izanami was so badly burned when she gave birth to him that she died. His father, Izanagi, beheaded Kagutsuchi with his sword, Ame no Ohabari, and cut his body into eight pieces which then became eight volcanoes. Kagutsuchi's corpse created many deities, including Take-Mikazuchi, Futsunushi, Amatsu Mikaboshi, and Ouyamatsumi. Kagutsuchi is the patron deity of blacksmiths and ceramic workers.

"Origin: Japan. The final child born to Izanagi and Izanami. Because he was on fire from the moment of his birth, he burned Izanami to death. Infuriated, Izanagi struck him down with his sword, Totsuka no Tsurugi. Many gods were born from the blood that then spurted from Kagutsuchi. Many others, such as Take-Mikazuchi, were born from Izanagi."
—Shin Megami Tensei A-Mode DDS Dictionary

Hinokagutsuchi was implemented during the 2015 Halloween event and his plug-in was obtainable through it. He can be fused in a special triple fusion of Suzaku, Ifrit, and Flaemis.

"A fire god that burned his mother Izanami upon childbirth. His full name is Hi-no-kagutsuchi. His father, furious with grief, slew Kagutsuchi with the sword Totsuka. Many gods were born from his corpse."
—Gouma-Den Devil Chart

Homusubi Crystal can be obtained from Kagutsuchi through fusion gifts or leveling up. It is needed to create the Kagutsuchi Sword.

Hi-no-Kagutsuchi is the main antagonist of the Persona 4 Arena duology and the instigator of all of its events. In Arena, he was known as the Malevolent Entity. Initially a formless incarnation, it had allied itself with a human in an attempt to re-create his own body, with the final goal being complete world destruction. This human, identified only as the Eerie Voice, is implied to have a connection to the Kirijo Group, as he shows himself capable of utilizing Kirijo Group protocols and taking control of Kirijo Group technology such as Labrys at will. Despite this, Hi-no-Kagutsuchi cannot operate within the TV world by himself due to lacking a form or a Persona. As a result, he has to momentarily take the form of certain characters in order to physically intervene.

His first plan is to use his accomplice to hijack a carriage that contains Labrys and throw her into the TV World. Before Labrys is thrown into the TV, he manipulates her into thinking that she wanted to become human, meet her mother and enroll in Yasogami High School, showing her scenes of Yasogami High and the hospital to justify his point. He then claims that if she forgot that she is in fact, an Anti-Shadow Suppression Weapon created by the Kirijo Group, he will grant her humanity accordingly. He then instigates the P-1 Grand Prix using Shadow Labrys, which takes the form of Yasogami High and is manifested from Shadow Labrys' desire for others to share the same pain as her. In reality, the Malevolent Entity only wanted to break the spirits of the Persona users so their Personas revert into Shadow Selves and he can absorb them to create a destructive form of himself. At the ending of the Shadow Operative story modes, after defeating a Labrys hijacked by his accomplice, the Malevolent Entity steps in himself, takes the form of the player character and fights them. However, he is defeated and is forced to retreat.

In Ultimax, his role remains the same, although as the P-1 Grand Prix taught him, the will of the Persona users are too powerful, so absorbing them would cause him to become unstable due to the obedience of their hosts. Instead, he now creates fake copies of Persona users from Shadows, alongside a red fog enshrouding Inaba and the tower standing atop Yasogami High. He then claims that the world will end in an hour and forces the Persona users to fight their Shadow clones with the intent of making the Persona users fight without hesitation, so their Persona Fragments can be carved out as soon as they fight the fakes. The shards act as a stabilizer for his form as they were built from the strength of heart, effectively making him closer to his plan every fight and allowing him to achieve his plan without any potential backlashes.

He takes the unstable form of "General Teddie" and works together with Sho Minazuki, as he promised that Minazuki will be able to take revenge of Shuji Ikutsuki's mistreatment of him by destroying everything so he could forever remain at peace in solitude, free from all suffering he had in the past. This was a lie however, as Kagutsuchi had intended to betray Sho and Minazuki; he was merely using them for his true motive, to create a body of his own fit for world destruction. He then drops his "General Teddie" guise and mannerisms, goes for the back of Minazuki's head and uses his body as a vessel. Kagutsuchi then manifests the body he has created from the Shadows he gathered, taking the form of a flaming serpent. Depending on the route the player takes, he is defeated by either Yu Narukami and Tohru Adachi or Labrys. He was born from the desire of eternal solitude when the fog appeared in Inaba. In the P3 Story Mode, he is also described as being born from the dissatisfaction of people. In both cases, Elizabeth states that he is born from people who desire death.

The Malevolent Entity exhibits a wide range of powers throughout the Arena duology; It is capable of appearing out of and disappearing into thin air at will, creating fakes of people, telepathy and even outright possessing people to do its bidding. Despite being an embodiment of pure destruction, it is also surprisingly manipulative and is in no means, a mindless, destructive avatar.

In the Japanese versions, he is voiced by Fumihiko Tachiki, while being voiced in English by Patrick Seitz (the same voice actors used for the series' announcer).

The Malevolent Entity appears in the final chapter of the manga, where it possesses Labrys after she gains her Persona. It does not take the form of any character's Shadow, and tries to crush Aigis' neck only for Akihiko and Mitsuru to intervene. After failing to attempt to destroy Aigis, he attempts to crush Labrys' own neck until she gains the willpower to fight back against its possession. Both Fuuka Yamagishi and Rise Kujikawa use their Personas to expel it from her body, where it disappears afterwards. 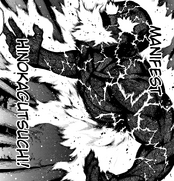 Hi no Kagutsuchi as it appears in Devil Summoner: Raidou Kuzunoha vs. The Lone Marebito

The Malevolent Entity posing as Aigis 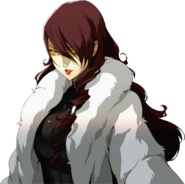 The Malevolent Entity posing as Mitsuru 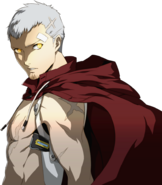 The Malevolent Entity posing as Akihiko

The Malevolent Entity as he appears in the Arena Manga.

Labrys being hacked by the Malevolent Entity in the Arena Manga.

Malevolent Entity exposing his plan in Labrys' body in the Arena Manga. 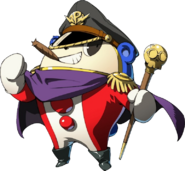 Hinokagutsuchi appears in an anime cutscene of Persona 4 Arena Ultimax

Hi no Kagutsuchi as it appears in Persona 4 Arena Ultimax