Hinako Kujou is a character from Devil Survivor 2. She is a civilian who joins JP's to help others.

Hinako is a young, beautiful woman with bright orange long hair tied into a ponytail and wears a white lotus flower, and has orange eyes with blue rectangular glasses. She wears a small black vest with a bright blue tie and white fur choker, long black extended gloves that reach to her arms, black mini skirt, black slippers and carries around a long design pattern white piece of cloth.

In the anime, her long cloth is plain white. After Merak's defeat, she currently wears bandages to cover her right eye and left arm until the world has been reset like in the beginning.

In Devil Survivor 2 Record Breaker,  Hinako now wears her long hair down revealing it to be back length.  Her outfit consists of a black dress with white collar, and now wears black lotus flower instead of white.

A passionate character, Hinako is a firm believer of human decency. She constantly looks after everyone and when there are problems, she is quick to be almost suicidal. She refuses to change into a more modest outfit because she claims it wouldn't have as much impact as her current one.

Hinako is a rival to Airi Ban. The two contrast each other, the two being individuals with talents in the entertainment field however having differing views regarding their fields. Hinako preservers with her aspiration of dancing and has the strong constitution to follow through with her goals. Airi, however, is someone who threw away her dream, quite bitterly, but tries to become flexible and adapt to the situation around her. 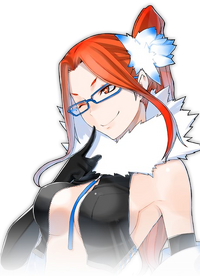 A dancer living in Osaka. She is studying various styles of dancing from around the world, starting with traditional Japanese dancing. She is the single daughter of the Kujou family head.

Hinako can be seen earlier during an event with Daichi, arguing how people are overcharging products and that everyone needs to work together to survive. She reappears running past the group to help save people from demons, and later asks the group to help her become accepted into JP's, hoping that doing so would allow her to aid people even more. She aids the group in revealing the location shown in Keita's Death Clip, and joins them in defeating two demons to save him. She quickly asks Keita to introduce her to JPs, using the fact that she saved him as leverage, and is seen sending off the group at the train station.

Operation: Third Eye is planned, where Shiva is to shoot down Alioth using his Pasupata. As Shiva is known as the Lord of Dance, an expert dancer, Hinako, is needed to summon him. As Hinako begins her dance to summon Shiva, demons appear around the area, drawn to Shiva's aura of power. The protagonist must defeat all the demons while protecting Hinako and allowing her to complete her dance. Once she finishes, an applause is heard, and Shiva appears, agreeing to lend her his strength once. When Operation: Third Eye begins, Shiva is summoned, but Hinako ends up keeping him occupied while they wait for Kama to shoot him. Once Shiva gets shot, the protagonist and Hinako quickly evacuate the area as he prepares his Pasupata.

She is the first one to confront Yamato after hearing from the protagonist that the magic circle under the government building can be used against Mizar's self-replication abilities. Yamato initially rejects this idea until the protagonist convinced him to try since they have no other option.

If the protagonist sides with Daichi, she joins the protagonist along with Io and Jungo if they are alive. Otherwise, she is fought alongside Jungo first in Tokyo. During that fight, Shiva appears as soon as the battle begins to fulfill his promise of lending his strength, though he will leave the battle if she is defeated before him.

In the Triumphant ending, Hinako is seen performing her dance alongside with Airi, who is playing accompanying music on her electronic keyboard.

In the world created after Polaris' trial, Hinako becomes an idol unit together with Airi, and both are popularly known as AiHina pair.

Hinako welcomes the party, introduces herself, and introduces Keita after Hibiki and the rest arrive at Osaka branch's secret subway train, and joins the party to search for Fumi. She leads the party to Fumi's lab where she was last seen, stating that there's no clue regarding her disappearance.

Several times later, Hinako and the party arrive at JP's Osaka main bureau shortly after the hacker's attack. She gives suggestion to shut down the power but is refused because doing so will release Tsutenkaku's barrier, thus making Osaka susceptible to invaders. Shortly after Hinako receives Keita's death clip by the abandoned Festival Gate, limiting their search for the hacker to the Festival Gate. Hinako and the rest of the party, along with eight more of JP’s summoners, are sent there.

At first she and others made in time to save Keita from preventing his "death" by sending Lilim to lift him from a sharp iron bar. Hinako then joins forces with Keita along with Hibiki to hold out for demons while Io and Daichi go to look for the hacker nearby. Shortly after, Hinako, Hibiki and Keita witness Botis holding Io's neck in an attempt to fatally drop her, but is saved by Keita's Berserker. Hinako goes after Io who points at the hacker, revealing the hacker as Fumi. She proceeds to attack Botis by using Lilim but results in Lilim's defeat.

After Hibiki and Keita successfully hit Botis and Daichi destroys Fumi's PC, Botis reappears behind Fumi, knocks Berserker, and hits it with lightning. The moment they wake up, she's found with Keita's dead body under the stairs, grieving over Keita's death.

Before being sent to fight Merak, she tells Io that a day before, Keita helped her when she was unable to move due to fallen debris by having Berserker lift it and joined JP's afterwards. She is then called to be on the defense line and states that she cannot stay still and do nothing. She then tells Io that she should stay by Hibiki's side since Hibiki is blaming himself for Keita's death even though it's not his fault.

When Merak attacks the Tsuutenkaku, Hinako joins one of the many JP's battalions in an attempt to wear it down. She is in a bind, but Hibiki saves her with Byakko before the attack could hit her. As Hibiki turns up and attempts to fight it in vain, Merak turns its attention to him and his Byakko, and begins focusing its fire on them. Hinako, along with the rest of her battalion, takes the blow in Byakko's place, and she is heavily injured as a result. She asked why Io is not with him and realized that both of them missed each other, commenting how dumb they are before fainting. After Merak was defeated, she regains her consciousness, relieved that Hibiki has defeated Merak.

She greets Hibiki, Daichi and Io when they arrived back in Osaka to fight against Megrez that had manifested there. The three are relieved that she's still alive, especially Hibiki who breaks into tears. She then hugs Hibiki, comforting him.

She and Airi are chosen to summon two specific demons needed to defeat Alioth. Hinako is chosen based on her aptitude for dancing that is far more efficient to awaken Shiva than the dancers prepared by JP's. After defeating Alioth, she attends dinner at night as Yamato announces his goal.

Hinako along with the others witness Io being the sacrifice for Lugh.

She, along with everyone else, gets a death clip and fights Benetnasch. Her Berserker is then withdrawn and runs away with everyone but falls into a pit. Hinako gets mortally wounded by Dudbe's copies and asks Daichi to take care of Io as her final request.

When the world was reset to the beginning by Hibiki's wish, Hinako decides to leave her household to travel and see how popular her dancing skills can get, and after that she will consider taking over her family business.

Hinako's Fate events center around the worth of a talent like dancing in the post-apocalyptic world of Devil Survivor 2. In the first events of her Fate route, Airi criticizes Hinako's talent for being worthless as it has no apparent practical value. As the protagonist progresses along the Fate events, this sentiment reinforces itself as Hinako is unable to help out civilians in danger and is forced to rely on the skills of the other Demon Tamers. However, after Alioth's defeat, Airi admits to being impressed by Hinako's performance during Shiva's summoning and requests an encore. This eventually rekindles Hinako's passion in dancing, and she even offers to teach Airi.

Hinako's build is similar to that of Daichi's, though with a greater emphasis on Strength and Agility. This makes her hit harder and faster than Daichi (at the cost of stat points in Magic and Vitality), but leaves her vulnerable to counterattacks if she doesn't finish off the enemy first. Her low Vitality and HP are negatives, making her susceptible to pressure from even moderately powerful attacks. Additionally, Hinako is rather lackluster at low-to-mid levels due to her average Agility and offensive stats compared to Daichi and Keita (at similar levels).

Like Daichi, she is an excellent user of Multi-Hit and Multi-Strike thanks to her high Strength and Agility stats, though she must have insurance against opponents that reflect physical attacks as they ignore Pierce. This can be alleviated through the use demons with magic attacks, or Holy Strike if cracked in NG+. Mid- to late-game, she is considered to be one of the best offensive characters in the whole game, stat-wise, as she is fairly self-sufficient.

Vs. Tokyo, as an Enemy[edit | edit source]

"Can that even be done...? I think it's impossible...
How can we have memories of things that don't happen...? I'm scared...!"
—Shadow Hinako upon spawning

Shadow Hinako appears on a team with Shadow Daichi and Shadow Jungo.

Hinako and Airi come accompanied with their own demons, but still must survive the battle during this event.

Hinako and Airi performing in the Triumphant ending 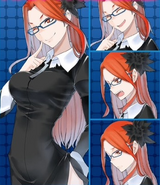 Devil Survivor 2 -Show your Free Will-

Hinako on the DVD cover

Retrieved from "https://megamitensei.fandom.com/wiki/Hinako_Kujou?oldid=393968"
Community content is available under CC-BY-SA unless otherwise noted.