Majin Tensei
"Maybe this sounds strange, but I don't even care if the two of us die now. Because I know we'll meet again. Somewhere, somehow... We'll find a way."
—The heroine, Bad Ending

The heroine is the protagonist's main companion in Majin Tensei.

After the protagonist clears the Sada Laboratory of a demon infestation and rescues the people held captive, he finds the heroine in cryogenic sleep. After waking up, she realizes she has amnesia and wishes to join the protagonist out of gratitude.

On the route of the best ending, Lucifer tells the heroine that she was never a human, but his own child he procreated shortly before the game's events, which is why she possesses no memories and magical power far greater than any demon the two have previously come across. He created her with the purpose of being the protagonist's companion, and transported her to the Sada Laboratory knowing he would find her. He understands if the heroine chooses to despise him, and says that even though she is a demon, she can choose to live her life as a human with the protagonist in the world above if she wishes.

In the normal ending, the protagonist and his companions find the terminal that connects the Expanse to the surface, but are unable to make it operational. The heroine, under the guise of operating the terminal's controls, begins sacrificing her life force to power the machine, stating she doesn’t care if she dies if it results in the protagonist being able to return home. Yet the protagonist is horrified by this and frantically pleads with her to stop, screaming he would rather remain in the Expanse alongside her than return to the human world alone, but his cries go unheard as she says goodbye.

In the best ending, the heroine shields the protagonist from Satan's fatal curse. The heroine, dying in the protagonist's arms, is relieved that he is unharmed. She begins to speak about her journey with the protagonist, grateful that she was able meet him and that even after learning she was a creature of the underworld, he treated her no differently than before. She states that even though she will die, she is happy as she is able to die as a human thanks to him. A hysterical protagonist refuses to acknowledge her wounds, telling her not to speak like it's over as the two of them are going to return home together. Even after she silently passes away, he continues to carry her body into the terminal connecting the Expanse to the surface. Against all odds, the Morning Star begins to radiate and the machine activates. In a post-credits scene, as the dawn begins to arrive, the Morning Star starts shining and physically manifests the body of the heroine with a gentle light. The heroine, returned from the dead, is thankful she is able to see the protagonist again, and says to him that it is truly her.

In the manga, Mio Tsuzuki is the younger sister of the protagonist, Atsuya, who was abducted by a wyvern in the beginning of the story.

In the second volume, Atsuya discovers a girl being experimented on in the Sada Laboratory and angrily confronts the scientist responsible. After freeing her, he introduces himself and is taken aback when the girl, suffering from amnesia, recalls her name as Mio, the same as his missing sister. Mio saves Atsuya's life from Minotaur by casting a Megido spell, but this leads to her being ostracized by other humans due to her ability to use magic.

Although not being seen, the heroine, along with the protagonist, is mentioned by Lucifer in the Neutral route as Masakiyo Ogiwara's true parents who saved the human world during a crisis, and left their child with the Ogiwara family.

The protagonist and heroine as depicted in the guide book 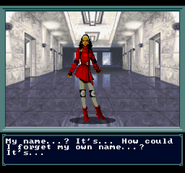 Atsuya and Mio in True Remembrance

Mio introducing herself to Atsuya in True Remembrance