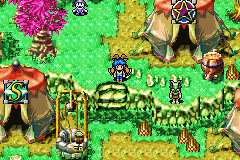 Hermit (ハーミット) is a small town in the in the Devil Children series.

Hermit is a town in Valhalla built by traveling entertainers. It is the first town encountered after leaving the Time Tower and is where the Akira will meet Judy and Guy for the first time.

Hermit is the first town visited by Jin in Valhalla. Where Imperium troops have occupied it to route out all Rebels and send them to Limbo. He meets Judy here and defeats the Imperius soldier Kyme.

As the town was built by traveling entertainers, the buildings are tents. As with most towns, it has an Inn, Store and Demon Lab.

The town is only visited on Akira's route, where he can get the first explanations for fusing and such from Gale.

Retrieved from "https://megamitensei.fandom.com/wiki/Hermit_(Devil_Children)?oldid=180684"
Community content is available under CC-BY-SA unless otherwise noted.