Hermes is a Persona in the series.

Hermes, the youngest of the Twelve Olympians, is the messenger of the gods in the ancient Greece. He is the offspring of Zeus and Maia, and also recognized as the patron of travelers, commerce, athletics, literature and poets, sometimes of healing and invention, even of thieves and liars. He was well worshiped by the ancient Greeks and apparently his figure appeared in many of their myths. As an infant, he created the first lyre, which he gifted to Apollo as compensation for stealing immortal cattle, who in return gave him the caduceus, a herald staff adorned with wings and entwined by two serpents, nowadays often used to symbolize medicine. His main task is to aid travelers on their journey, and to guide the dead to the Underworld, where he could enter or leave without any hindrance. He is known to wear a winged hat (petasos) and winged sandals (talaria). Hermes is the analogue of the Roman god, Mercurius. He has also been combined with the Egyptian god Thoth to become Hermes Trismegistus.

Hermes is the initial Persona of Jun Kurosu, the one that assumedly causes Jun to be transferred to Kasugayama High School after his continual manifestations caused serious injuries to students who bullied Jun. Hermes' appearance follow the original god's pattern with the Caduceus (modeled after a rocket ship) held in his right hand, but the wings adorned on his cap and shoes are replaced by mechanically fashioned rockets. The rocket/plane motifs in his design are likely a nod to Jun's favorite book, The Little Prince. He is of the Fortune Arcana and his power is involved with the wind element, capable of reflecting any kind of attacks related to it and nullifies dark, although he has a weakness against lightning. Once the player has completed the Aquarius Temple scenario, Hermes can mutate at Rank 8, allowing Igor to transfigure Hermes into Chronos in the Velvet Room.

Hermes returns in Persona 3 as Junpei Iori's Initial Persona, first appearing after the Dark Hour manages to exist in front of him, causing him to scream in terror. The portrayal of Hermes now lacks of his Caduceus, but the wings on the head and the huge ones attached to his lower body part still represents the god's origin. His skills and abilities deploy fire based attacks and also physical related ones. This version also resists fire well but has a weakness against direct wind attacks, in contrary to his prior incarnation. Another change is that Hermes is now a Persona of the Magician Arcana, an Arcana which fits more accurately to the original god's symbolism of athleticism, activity, and cunning behavior. 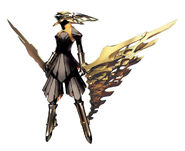 Hermes as depicted in Persona 3.

Concept artwork of Hermes in Persona 3. 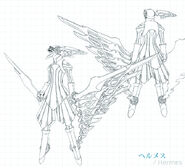 Concept anime sketch of Hermes in Persona 3 The Movie. 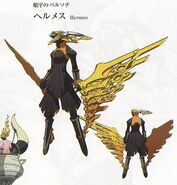 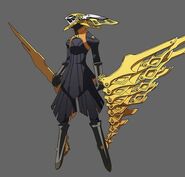 Hermes appears in Persona 3 The Movie.

Hermes in Persona Q: Shadow of the Labyrinth

Hermes in Side P3.