Hereward is a Persona in Persona 5 Royal.

Hereward the Wake was an Anglo-Saxon nobleman and the leader of a resistance. It is possible that some of the stories about Hereward mutated into tales about Robin Hood or influenced them.

"The legendary Saxon who opposed the Normans during the conquest of England in the 11th century. Said to have been the basis for tales of Robin Hood. Called "Hereward the Wake" for his watchfulness."
—Persona 5 Royal compendium

Hereward is the third-tier Persona of Goro Akechi. His Trait is Ingenious Spirit, which may decrease the SP cost of allies' support/Almighty skills by half.

In order for Loki to evolve into Hereward, the protagonist must do the following:

Hereward learns a unique skill upon its evolution from Loki, Rebellion Blade (反逆の刄, Hangyaku no Yaiba)?, which deals colossal Almighty damage to a single target and deals bonus damage to enemies that are knocked down.

Due to the unique unlocking conditions of this Persona, it is impossible to use him or view his entry in the compendium prior to February 3rd, where combat is last available. This applies even for New Game Plus. Furthermore, unlike other teammates, since Akechi has disappeared, his stats and information, and therefore Hereward's entry as well, cannot be viewed on March 14th and March 19th. 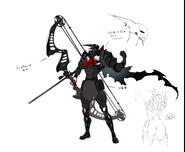 Concept art of Hereward, as seen in the Thieves Den gallery