Patrick Seitz (SMT III Nocturne Remastered)
"It's Hell Biker... Don't get cocky. We're going from one side of Hell to the other, you know..."
—Hell Biker upon Fusion, Persona 4

Hell Biker, or Hell's Angel in Japan, is a demon in the series.

Hell Biker in human motorcyclist whose violent nature and hatred of himself and the world had turned him into a demon. He claims to come from hell, clothed all in black, a red scarf streaming, he rides full of rage calling himself the "Angel of Hell." His anger with himself and the world causes him to lash out, that everyone else would suffer as well.

"A biker-turned-Fiend that claims to come from hell. With all the hatred of himself and the world, his reliance of only his own power turned him into this abominable figure."
—Shin Megami Tensei III: Nocturne compendium

After defeating Daisoujou, Hell Biker will appear on the freeway between Ikebukuro and Kabukicho. Upon arrival in the Fiends' realm, Hell Biker appears, demanding the Demi-fiend's Candelabrum. He mostly talks with a punk attitude. After he is defeated, he leaves behind the Candelabrum of Dignity.

Upon defeat, the Demi-fiend can now summon Hell Biker by performing a fusion that will result in a Fairy race demon, during a Half, 6/8 or 7/8 Kagutsuchi phase, while also in possession of a Deathstone (which can only be found in the Labyrinth of Amala).

Hell Biker can be encountered by using an Ultimate Summon Orb in front of the boss room in Shibuya's Celu Tower bronze-level instance. His plug-in can be acquired by turning in Essences of Yetzirah to the researcher in the Shinjuku Babel cathedral. He is a special triple fusion of Matador, Alice and Girimehkala.

Hell Biker, along with the other Fiends that held Menorahs and the Demi-fiend, are set to appear as part of the Return of the True Demon DLC pack. As before, defeating Hell Biker unlocks the ability to fuse him.

Hell Biker can only be fused after obtaining the Red Muffler key item from one of Elizabeth's Requests. In The Answer, Aigis only needs to reach Level 60 to fuse him.

Available once the protagonist reaches Level 66. Can be obtained from Shuffle Time in Magatsu Mandala and Yomotsu Hirasaka dungeon.

"A motorcyclist whose violent nature turned him into a demon. His anger with himself and the world causes him to lash out, that everyone else would suffer as well."
—Persona 5 background

Hell Biker is the fifth Persona of the Death Arcana and can only be obtained through fusion in the Velvet Room. He is one of the four Personas that learns the Speed Master skill and the second Persona to learn Fire Boost. He is also one of the three sources of the Trigger Happy skill. Hell Biker is the first Persona to learn Mamudoon. When itemized through Electric Chair execution, Hell Biker yields the Black Jacket armor for male characters, which has 120 DEF, 12 EVA and protects the wearer from Curse insta-kill skills.

"Clothed all in black, a red scarf streaming, he rides full of rage calling himself the "Angel of Hell". His strong hate for the world and himself turned him into this vile demon whose violent hatred is infectious."
—Shin Megami Tensei Liberation Dx2 compendium

Hell Biker is an uncommon Rank 4 demon which can only be obtained through summoning. His unique skill "Red Zone" which imparts Critical status on all party members, is limited to 3 uses per battle.

Jeng Yun Tsai dressed up as Hell Biker during the Liberator's party for the Hee-lloween Party-ho! event. He also encountered a young man who was transformed into one in the "Road Rage" event. 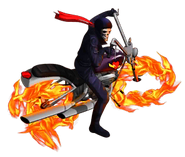 Hell Biker in Persona Q: Shadow of the Labyrinth 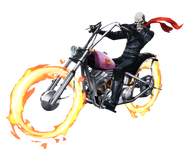