Dave Wittenberg
"I am Helios... Bearing the ancient sun, I am the one who violates the night! I shall become your loyal chariot!!"
—Helios, Persona 2: Eternal Punishment

Helios is a Persona in the series.

In Greek mythology, Helios is the Titan of the Sun and is the one that drives the chariot of the sun. He is the son of the Titans Hyperion and Theia.

Helios is a satellite under the control of Satan, who seeks to use it to cleanse Megalopolis of its corruption by firing it and destroying the city. He succeeds in the Light-Law route, where Karen is temporarily erased until the party defeats Satan in Amnesia's Eden and prevents it from firing.

Helios is Katsuya Suou's initial Persona. He is summoned for the first time after JOKER attacks Katsuya in the Seven Sisters High School. Katsuya is initially dispirited by Helios's appearance, because he likes cats but is allergic to them. 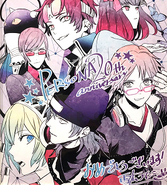