Hecatoncheir is a demon in the series.

Known as Hekatonkheires or Hecatonchires, they were giant beings from Greek myth. Having one hundred hands and fifty heads, their father Ouranos found them disgusting and threw them into Tartarus. Eventually, Zeus would free them and they would aid the gods against the Titans.

Hecatonchires can be encountered as a boss by using Kymopoleia's Hair Accessory in Shinjuku. The boss has a small chance of reflecting any physical attack and will always reflect fire. Rarely, he will drop an Abyss Seed. Turning this in to the Yagiya on Suginami Tunnels' gold-level instance's final floor will give players the ability to fuse Hecatonchires. He is fused through a special triple fusion of Ubelluris, Cyclops and Ogre.

"Giants born from Uranus and Gaia. The name means "those with 100 arms." During the war of the Titans, Zeus brought them out of Hades. They helped him obtain victory."
—Shin Megami Tensei IV Apocalypse compendium

Hekatoncheires can be found in Camp Ichigaya. He can teach Nanashi the Panic Voice and Hades Blast skills through its Demon Whisper. It benefits from learning Physical and ailment skills.

"Giants born from Uranus and Gaia. The name means "those with a hundred arms." During the war of the Titans, Zeus freed them from the Underworld to help him obtain victory."
—Persona 5 background

As part of the Strength Confidant, Caroline and Justine wish to see a Hecatoncheires with the skill Masukunda. This can be achieved by fusing Lilim with the Unicorn Persona, and selecting the Masukunda skill that Lilim possesses as an inherited skill.

Hecatoncheir is seen being used by Joker against Shadow Okumura. It has enough power to hurl his Execurobo aside and cripple it, allowing Haru to finish it using Milady.

"An awesome demon with six arms that can crush the life out of any opponent."
—Demonary, DemiKids

Known as Hekaton, he can perform the combo Megaton with Krak or Cyclops.

Hecatoncheir appears as the boss of Wind Makai. A general of the Imperium, he hides inside his cave while his soldiers guard the switches that will force him out. Unlike most bosses, he lacks a demon soldier to aid him in combat by healing or attacking foes. Upon defeat, he drops the Green Crystal.

Known as Hecatoncheires, he is fought as a boss is the second area of the game. After Serph and company climb a ladder with a small Karma Terminal near the end of the area, they will be confronted by a Karma Society officer, who will transform into Hecatoncheires and attack.

Hecatoncheires will counter physical attacks and has access to a special attack called Hundred Fist, which gets progressively stronger as he gets weaker and hits the whole party. Multiple party members with Tera and Dia will make the battle easier. Hecatoncheires can later be encountered as a normal enemy in the corrupted EGG Installation.

"Giants born from Uranus and Gaia. With 50 heads and 100 arms, their name means "those with 100 arms."During the war of Titans, Zeus freed them from Tartarus to help him obtain victory."
—Shin Megami Tensei: Liberation Dx2 compendium

Hecatoncheir as it appears in Devil Children Messiah Riser

Hecatoncheir as it appears in Card Summoner

Hecatoncheir as it appears in Persona 3 The Movie

Hecatoncheir as it appears in Persona 5 The Animation 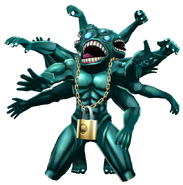 Hecatoncheir in Persona O.A.
Community content is available under CC-BY-SA unless otherwise noted.