Crispin Freeman
Heat is a character in the Digital Devil Saga duology.

Before the events at Ground Zero and for a short time afterwards, Heat is calm and emotionless, efficiently executing Serph's orders. However, once his emotions emerge, he becomes brash, with a strong penchant for violence. He cares little for other people beyond his Tribe or Sera and has little compunction about eating others.

As time passes, he also develops romantic feelings for Sera; however, he is unable to act on them because of the odd nature of his emotions: having no experience with issues he could not settle with force has left him with near-to-no experience in dealing with complex feelings such as love and jealousy. After the revelations of Varin Omega, he realized he really didn't care about past lives; he only believed the people who they had become truly mattered in the end.

However, his inability to deal with complex emotions also left him wide open to eventual manipulation by Margot Cuvier and led to him being used as a weapon against his own comrades by the Karma Society.

Eventually, during the events of the sun, he managed to settle his issues and resolve his feelings, finding a form of stability. Depending on the choices made across both games, he may also rejoin his tribe and march towards the sun's core to help save the world.

In the novels, he never develops romantic feelings for Sera (he did love Kei Minase, whose memories have been transferred to Sera, but he never actually felt Sera and Kei were the same person). He grows a strong hate for Shin Minase (caused by Shin Minase's plan of using Sera to talk to God, how and how Kazuki has lost his sanity after Henry Marcus' attack) which leads him to join Karma Society because he perceives Serph as Shin. While he and the real Shin ironically end up working together, Heat strongly despises Shin, and tries to humiliate him by besting him in a fight. He thinks of himself as the only one worthy of killing Serph.

He also starts despising the post-apocalyptic state of the world and how the Embryons have been reduced to cannibal superweapons. and as such wants to destroy the world and remake it anew.

As he dies, he thanks Serph for everything and lets himself be eaten, dying at peace with himself. Then as Serph thinks everything could have been avoided had he allied with Karma Society, Heat's projection inside his mind tells him that he would have never accepted for the Embryon to submit to someone else. 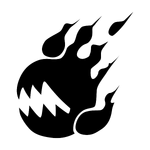 Heat is one of the most ruthless members of Embryon. His right arm is emblazoned with the "Fireball" Atma, which allows him to transform into Agni. Before the awakening, Heat would dutifully carry out any order, but after being infected with the Atma Virus, he found it hard to control his violent feelings of anger. He watches Sera closely, and is at times bothered by his feelings toward her, which he doesn't fully understand.

As a human, in battle he uses a grenade launcher. As Agni, he is strong against fire attacks but weak against ice attacks. His statistics emphasize Strength and Vitality, with a significant weakness in Magic.

He is one of the first who awakens to emotions when invading Svadhisthana. Unlike Argilla, he revels in his strength and uses it to brutally question Harley, caring little for his breakdown and eventual degradation into Hayagriva. He rapidly decides to eat the slain corpses of his enemies with no questioning.

After brutally defeating Bat in Manipura, Heat moved in to devour him, but was stopped by Argilla. Annoyed at being deprived of a meal, he commented it would have been better if he had indeed been allowed to eat Bat. Later events would prove him right, annoying him further. However, he eventually forgave Argilla, acknowledging her and the others as his comrades.

During the attack at Coordinate 136, which resembles a tourist attraction, a story is told as they ascend the attraction (which resembles a large mansion) in the style of a fairy tale. It grows more twisted as they reach higher levels, which is a reference of the connection between Serph Sheffield, Heat O'Brien and Sera.

After the defeat of Varin Omega and the revelation they all had a prior life, the memories of which had been stripped away, Heat stated he cared little for whatever Varin had said: he only cared about the people they had become in the life they were living at the time. While still emotionally not able to verbally admit he cared for the others, they understood and supported his worldview.

He was one of the few Junkyard survivors after the defeat of Jenna Angel.

Heat is a member of the Embryon who is separated from the others when they emerge into the real world. He finds his way to the Karma Society where Margot Cuvier convinces him to side with them so that he may have his revenge against Serph. Violent in nature, Heat seems to be unsure how to express his conflicting emotions towards Serph and Sera, so his feelings manifest themselves as anger. He is later heard to be wailing in despair in the EGG Facility, and openly encourages the party not to die while fighting them.

After gutting Serph, he becomes fused with the EGG, transforming him into Vritra. Whether he did this on purpose or was a victim of the data corruption in the area is not stated. He is mortally wounded when Serph (as Varna) bursts out of his body, and he dies soon afterwards. His data is sent to the sun, and depending on the dialog choices made by the player over both games, he will either join Seraph for one final battle or allow Roland to take his place. As he is not able to reach enlightenment, he is reincarnated.

The best combatant of the Embryon and its number two, he has fought alongside Serph since the beginning.

As Kazuki Homura's memories start awakening, Heat develops a strong hatred towards Shin Minase which makes him willing to join Karma Society in order to kill Serph (whom he perceives as Shin). His Atma is upgraded to Shiva. Serph and his party try to bring Heat back at their side, but Heat refuses, as he considers himself "the only one worthy of killing Serph". Heat enters the EGG after Serph had saved Sera, and soon kills Shin (who is crystallizing due to Serph's counterattack) by crushing him to dust. Gale sees Heat and attacks him, blaming him for having killed Serph despite not having done so.

Heat later blows up Washington and tries to reach New York, sowing destruction in the process. He attempts to summon a supernova in New York when Sera stops his attack. Later, as soon as Gale awakens and sees Heat, he attacks him. Sera asks him what's his reason for trying to kill the Embryon, but he refuses to answer. He fights Gale, and almost kills him when Sera represses him again. As he attacks the EGG gate in New York, Heat claims to be seeking God's power and to have almost gotten it. Just in time, Serph's arm appears from his body, and Varuna starts eating Shiva from the inside, causing him to revert to Agni and soon completely overpowering him. He stabs him into the chest in a berserk state. As he dies happily, Heat tells Serph that he would have never let Shin, of all people, kill him. He then reveals his reason for his violent outburst: he wanted to destroy everything and reset the world, creating new people, using God's power, as he hates how the Embryon have become bloodthirsty cannibal superweapons. Heat tells Gale he isn't interested in being healed, and lets himself die as Serph consumes him (and Sera also drinks some of his blood, planning on taking responsibility for the mess she had started).

After having died, he speaks to Serph from inside his body, telling him that he'd never accept to see the Embryon submit to someone else, and even if Serph had chosen to ally with Karma Society, his problems would have never been avoided and Heat would still have taken the blame for everything.

He and Roland are no longer "mutually exclusive depending on choices": Roland survives the novel series and doesn't develop an Atma, while Heat gets eaten from the inside by Serph, whose Atma Varuna absorbs Shiva and mutates into Vishnu. Heat is then seen as a spirit inside Serph alongside Sera, when Serph talks to God, and they're called the Trimurti.

Heat and Agni as they appear in Digital Devil Saga: Avatar Tuner

Heat and Agni as they appear in Digital Devil Saga: Avatar Tuner 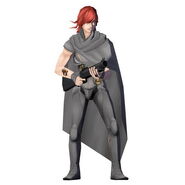