Hatsune Miku is a Vocaloid voice-synthesizer software product of Crypton Future Media. Version 1.0 of Miku's voice package was released on August 31, 2007, and has since been used by music artists around the world to create music in a variety of genres and vocal styles. Miku has appeared in hologram concerts in which she performs popular hit songs from numerous Vocaloid artists, and annual festivals such as Snow Miku and Magical Mirai are held for fans to gather and celebrate both her and her music.

Miku is a young teenage girl with very long aqua hair tied in pigtails that reaches to her ankles and aqua eyes. For her appearance in Persona 4: Dancing All Night, she wears a special costume designed by character designer Shigenori Soejima that consists of a white, skintight turtleneck with four large, black buttons adorned with various icons in a simple, dot-matrix pixel art style, and a small, black treble clef symbol in the center of the chest. She also wears a black miniskirt with suspenders, gloves, skintight boots, and wired, closed-back, over-ear headphones, featuring multiple pink lights on the outside of the drivers, which are covered by transparent, hemispherical casing on each ear, and appear to be connected via a coiled cable to her skirt, or possibly an audio player clipped to her waistband or belt.

Miku appears as a DLC playable character, specifically linked to the song "Heaven feat. Hatsune Miku (ATOLS Remix)". Like Marie and Adachi, her hair and eye colors can be customized. However, unlike the other player characters, she is unavailable as a FEVER partner.

Miku is referenced in the final chapter of Story Mode when Kanji misremembers and mangles Mikuratana-no-Kami's name. 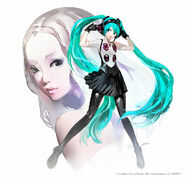 Hatsune Miku as she appears in-game