An Imp, Harmil is the competent servant of the angel Nathanael and someone who has known the troublemaker Paku for a long time. She gave Masaki Kuzuha the power of demons when he was born after Paku had given the power of Angels to Masaki and Takaharu Ougi. Harmil would later confront her master about why he did not tell Masaki about him being a chosen Devil Child. She decides that no matter what she will help Masaki since she's the one who gave him the power. She would later tell Masaki that she gave him the power after Paku reveals to her that he had given the power of Angels to Masaki.

Now working for Lucifer, she meets Paku at the beginning of the game to discuss the war that suddenly began between Zebul and Enoch. She would go to meet Akira and Amy Kashihara on earth, going after Amy when she runs off. She would witness the battle between Akira and Isaac, telling him that he was seeing an illusion and revealing it was really Jin that he was facing. Before Akira goes into Muspellheim, she appears and joins the party at the request of Lucifer. 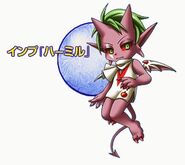 Harmir as she appears in White Book
Add a photo to this gallery
Retrieved from "https://megamitensei.fandom.com/wiki/Harmil?oldid=401381"
Community content is available under CC-BY-SA unless otherwise noted.