Hariti is a demon in the series.

Hariti is a demoness originating from what is now called Pakistan. She was originally an ogress who slew human children in her desperation to feed her hundreds of children. After the arrival of Buddhism, which came to Pakistan as a missionary religion, the legend of Hariti was given a new twist by Buddhist missionaries; being that, in order to put a stop to this way of feeding on the blood of children, Gautama Buddha hid away Priyankara, one of Hariti's sons, under a rice bowl and then pointed out to her that the suffering she was experiencing from losing one out of her hundreds of children could not be compared to that of the human mothers whose few children became her victims. Remorseful for her deeds, Hariti pledged to become the protector of childbirth and children and converted to Buddhism. From then on, she and her brood fed on pomegranates as a substitute for human flesh. This new image of her is what was incorporated into Buddhist lore, which because it came to comprise local Bactrian mythology, took on a new flavor before it spread from northern and western Pakistan to China and the other far reaches of Asia such as Japan.

"Origin: India. A she-demon of Indian lore. Known as Kishimojin in Japanese. She was originally a yaksini who kidnapped infants to feed them to her 500 children. When Buddha hid the yaksini's youngest child, she grew enraged. But through Buddha's chastisement, she converted and became Hariti."
—Shin Megami Tensei A-Mode DDS dictionary

Hariti the quest giver for the EX Mission, The unforgettable taste, at Bootes. She will first mention when talking to the protagonist that she used to devour humans in the past. To begin the mission talk to her during a Full Moon, where she'll suffer from withdrawal since she hasn't eaten humans in ages. In order to control it, she asks that the protagonist find her friend Persephone, as she has the human flavored pomegranate Hariti needs to quench her hunger. After finding her and retrieving it, Persephone will ask the protagonist to tell Hariti to join her at the new mall. Hariti will thank the protagonist and give him the Rasetsu Vest as his reward before going off to join Persephone in Carina.

Hariti resides in the Kishimojin temple and is the client in the Challenge Quest, Sunset for a Demonnapper. She requests Flynn to find her missing son Priyankara. Wu Kong appears to her and tells her he is in Ikebukuro, causing her to want to rush to his aid, but is convinced to let Flynn help her. She sprinkles him with a perfume so that her son Priyankara will know he was sent by her and leaves to look for him around Ikebukuro. She arrives after her son is saved, and the two are happily reunited, thanking Flynn before leaving.

Hariti can teach Nanashi the Diarama, Lullaby, Recarm and Energy Drain skills through her Demon Whisper. She benefits from learning healing, Light and ailment skills.

"A Buddhist goddess also known as Kishimojin.
She was originally an evil devil who ate children, but when Buddha hit the most beloved of her 500 children, she was stricken with sorrow. Having been taught the pain of losing a child, she then became a good god and started eating pomegranates instead of children."
—Shin Megami Tensei V lore

Hariti is a member of the Lady race and can be obtained through fusion in the World of Shadows.

Hariti is the sole member of the Lady Order in Megami Ibunroku Persona, but her Order was changed to Reaper in both the Japanese and English versions of Shin Megami Tensei: Persona.

Hariti appears in the 31st and 32nd chapters of the manga. Reiji Kido injures her with Loki's Baeiha spell, but is stopped from dealing the final blow by Naoya, who recognizes Hariti's voice as Setsuko's. The confrontation leaves Maki confused, as she doesn't have a mother yet feels nostalgic by the sound of Hariti's voice. Deciding to follow the voice of her heart, Maki attempts healing Hariti from the injury she received from Reiji and the demon reverts back to Setsuko.

"A Buddhist goddess also known as Kishimojin. She used to eat others' children, but changed her ways. She eats pomegranates now, and is a goddess of parenting."
—Persona 3 FES compendium

Hariti is the fourth Persona in the Empress Arcana, with a base level of 62. She can be summoned through fusion or found during Shuffle Time in the sixth block of Tartarus, Adamah.

"Also known as Kishimojin, she once ate children, but stopped after Buddha changed her ways. She now eats pomegranates and is a goddess of parenting."
—Persona 5 background

Hariti is the fourth Persona of the Empress Arcana and can only be obtained through fusion in the Velvet Room. She is one of three Personas available to the protagonist to learn the Energy Shower, and four to learn the Mabaisudi and Nocturnal Flash skills. She is also one of two Personas to learn the Dizzy Boost skill. When itemized using Electric Chair execution, Hariti will yield the Spirit Drain skill card.

By increasing Hariti's level to 41, she can learn the Samarecarm skill and pass it on to Bugs through an advanced fusion with Pixie and Pisaca. This will complete the request for Rank 9 of the Strength Confidant with Caroline and Justine.

"A Buddhist goddess also known as Kishimojin. She is revered as the goddess who protects the growth of children.
Hariti once was an evil demon that ate the children of others, but Buddha hid her youngest and most favorite child out of her 500 offspring and she fell into despair. Buddha preached to her the sadness of a parent losing their child and admonished her. She eats pomegranates now, and is a goddess of parenting."
—Devil Survivor 2 compendium

Hariti is unlocked by reaching Fate rank 3 with Otome Yanagiya. 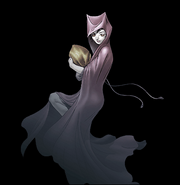 Hariti as she appears in Persona 3

Hariti as she appears in Card Summoner

Hariti as she appears in Devil Survivor

Hariti as she appears in Devil Survivor 2

Hariti as she appears in the Megami Ibunroku Persona manga

Hariti she appears in Persona 5 Royal

Hariti as she appears in Persona O.A.