Jessica Straus
"The best girls don't go steady for nothing, you know? You need to make an effort."
—Hanako Ohtani to Yosuke Hanamura after crushing his bike, Persona 4 Golden

Hanako Ohtani is a character from Persona 4. She is a student from Yasogami High School.

Hanako is an overweight teenage girl with short, brown hair with a red ribbon clip, dark eyes, freckles and big lips. She wears the standard school uniform of Yasogami High. At the school camp out she wears a blue P.E. uniform. At the Miss Yasogami High pageant she wears a red ribbon tied to her hair on both sides and a two piece pink bikini swimsuit.

Hanako is a brash young girl. She is known to play coyly unaware of people's feelings around her, like rejecting Kanji Tatsumi in Persona 4: The Animation and breaking Yosuke Hanamura's scooter in Persona 4 Golden. Hanako is also extremely vain and arrogant in her looks and her figure, going so far as to taunt the girls of the Investigation Team before the swimsuit contest, and loves to eat anything and everything, including Mystery Food X. She is friends with Ms. Kashiwagi as they both hang out in the Amagi Inn often if something breaks their hearts. She may have a crush on Teddie, due to the Amagi Inn incident, as well as on the protagonist. It seems that Hanako has a few admirers around Inaba, as she received as many votes and praise as the other girls in the competition but lost to Naoto Shirogane.

Hanako is a second-year student of Yasogami High. She is morbidly obese, and is seen in her appearances munching over a large amount of food, not sharing any with other starving students. Hanako also snores in her sleep, and during the class outing, she shared the tent with Chie Satonaka and Yukiko Amagi, causing the two girls to flee towards the protagonist and Yosuke's tent for refuge.

During the Culture Festival, she entered the beauty pageant, confident she would at least win against the girls of the Investigation Team. She mocked the girls, but managed to keep her cool when Chie flared up. It is unknown how the students reacted to her entering, but in the end, she and the other contestants lost to Naoto.

After the festival, she went with Ms. Kashiwagi to the Amagi Inn to weep for their loss, which was discovered by the protagonist and his friends when they snuck into their room by mistake. Yukiko revealed that the two frequently came to the inn's hot springs together.

On the final day of the Normal and True Ending routes, Hanako can be found sitting at the protagonist's desk. Talking to her reveals that she's actually the protagonist's secret admirer who occasionally left gifts in his shoe locker.

In episode 8, she is seen during the school camping trip trying Chie's and Yukiko's Mystery Food X and likes the taste despite Yosuke and Yu declaring it tastes horrible. Later that night, Kanji tries to enter the girls' tent only to get knocked out by Chie and passes out next to Hanako. She rolls over and they start cuddling, which they both seem to enjoy made apparent by Kanji's blushing and her moaning. The next day Hanako sees Kanji and seems embarrassed, so the group comes to the conclusion that she's going to confess her feelings for Kanji so they decide to hide. She ends up telling Kanji that he isn't her type, tells him it never happened and then leaves.

Hanako first appears a few days earlier than in the original, in Okina City. During Operation Up Close and Personal, a woman Yosuke chats up deliberately gives him the wrong number, which he only discovers when he accidentally asks Hanako out on a motorcycle date. Her weight is too much for Yosuke's scooter, and it immediately loses both wheels, forcing Yosuke to hitch a ride with Kanji back to Inaba. Yosuke is frustrated when he has to talk to her at the campout, but decides to anyway because their evening meal turned out to be Mystery Food X and he feels she owes him for damaging his scooter; unfortunately, the outcome is still the same as it was in the original edition.

During the credits, a dinosaur with Yosukesaurus' body and Hanako's head appears, and it is seen chasing Yosuke Hanamura. Koromaru and Morgana ride it as it does so. 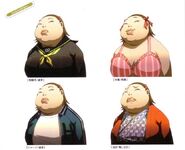 Hanako Ohtani in Persona 4 The Animation

Kashiwagi and Hanako pursue the guys 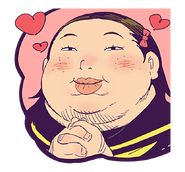