He wears a dark gray suit with white collar shirt, black striped tie and yellow jacket with black sleeves and yellow trimm along the sleeves.

In his transformed state, he has cyan skin and pink hair, with black scleras and red irises and cracks all around his eyes.

Hallelujah is a young member of the Ashura-kai and joins Nanashi's party to represent his faction.

By his brother's orders, he keeps an eye on the Nanashi's party, but he's rather timid and doesn't like standing out. His demon of choice is Chironnupu, which is Ainu for "Fox," a divine beast which is said to bring calamity to humans.

He is later revealed to be half-demon through his father, a fallen angel.

He uses Endure and ailment-immunity effects bestowed by Chironnuppu allow the party to survive lethal hits and come out unscathed from ailment inflicted attacks; the only downside is like all partners the player has no control over when he casts those skills. After revealing his true form, he learns Megidolaon and 2 exclusive fire and ice skills, turning him into a nuker. His Partner Awakening passive grants the equivalent to High [Element] Pleroma for all magic; like all Partner Awakenings it can be stacked with similar passives for increased effect. His abilities are perfectly suited for taking down his father.

Illustration of Hallelujah and the main characters by Masayuki Doi 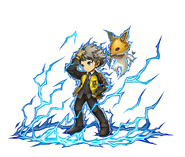 Hallelujah and Chironuppu in Brave Frontier 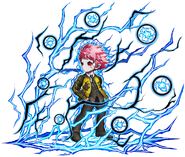 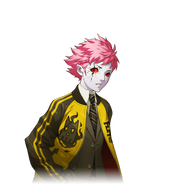 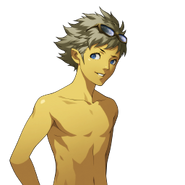