Reverse
Gold
"I am Hades... King of the underworld who judges the evil and the righteous alike. I am thou... Thou art I... Let us walk this path together..."
—Hades, Persona 2: Innocent Sin

Hades is a demon in the series.

Hades, also known as the Unseen One or Haides, is known as the king and supreme ruler of the underworld originating from the myths of ancient Greece. He is the Greek counterpart of the Roman God Pluto. Born from the union of Cronus and Rhea, he later participated in the war against the Titans and successfully won along their siblings. While Zeus and Poseidon ruled the sky and the sea territory respectively, he claimed the darkest place, located inside the earth, where the light of the sun is not allowed to shine, which is the realm of the dead (although he's not the god of death himself, as the role would be taken by Thanatos).

His duty subsequently made him often unable to leave his own world and therefore, he is not considered to be one of the twelve Olympians, but is still referred as one of the principal gods. He has many assistants and servants, among others are the judges who judge the human soul (Minos, Rhadamanthus, and Aiacos), Cerberus the guardian of the underworld, and the Moirae who control over fate. One of the most famous myths mentioned in history is the abduction of Persephone, goddess of spring, where Hades kidnapped her. Demeter demanded her daughter to be released and he did, but not before giving the pomegranate fruit to Persephone, which made her the queen of the underworld, therefore every half year she must return to him. Hades also appears in the tale of Orpheus and Eurydice.

Hades of the Death Arcana is obtainable after the player successfully finds the Yellow Owl Mask. He becomes Eikichi Mishina's ultimate Persona. Hades' appearance is devilish, donning a dark, gothic fashioned robe and his head is completely covered, a tribute to his origin. His right hand carries a tri-skull ornament which could be a symbol of Cerberus or simply his lordship over the dead.

In the Japanese version, Hades speaks in a very effeminate tone, reflecting his nature of being the lord of the netherworld or the androgyny of Visual rock that Eikichi indulges in. Both forms of Hades even address themselves using "warawa" (妾), an archaic feminine first person pronoun. In the PSP English version, Hades speaks in the dignified gentleman tone.

His skills in battle are related to water and darkness elements. He has immunity against water and holy attacks, and weaknesses toward fire and darkness attacks. Hades will receive immunity against darkness only when he defeats his reverse self. His ultimate ability Bloody Honeymoon can be fused to perform the Grand Cross, as long as Apollo, Artemis, Venus, and Chronos have mastered their own special ability and participate in the same battle.

Hades in this game appears in the golden metallic form summoned by Metal Eikichi of the Metal Trio. Much like the Reverse Hades, his ultimate attack is Bloody Divorce rather than Bloody Honeymoon.

"The king of the dark realms who is fearsome to behold, but is actually kind and benevolent."
—Demonary, DemiKids

Hades has the power DarkBoost. 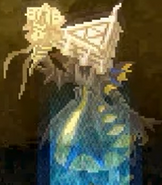 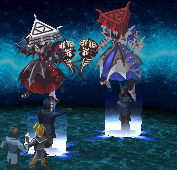