Guarding is a recurring mechanic in the series.

Guarding is an option available in the battle menu. If used, the user will not do anything, but during that turn they will have their defense increased against other attacks. In some games in the series, defending characters will be protected from being Downed against elemental weaknesses.

Reinforcements will guard if they have no healing or support moves available.

Guarding is a command option available for both the protagonist and demon allies. The user needs to Guard at their last turn for it to have an effect: guarding beforehand has no effect.

Guarding lowers the damage taken by roughly 20%, similarly to a single buff of Rakukaja. It stacks via multiplication. It does not stack with resistances.

Guarding protects against Critical hits from both regular attacks, and unlike with resistances, it also protects from Omagatoki: Critical. It also prevents their weaknesses from being exploited, in which case, users weak to Light and Dark cannot be killed by instant-death when guarding.

Both party members and enemies can guard. While there are enemies in later games capable of doing this, such as Shadow Yosuke from Persona 4, they are exceptions rather than the norm, and as such the first Persona remains the only entry in the series where all enemies and bosses are capable of guarding.

The enemy-exclusive skill Guard Punish deals high Almighty damage to all party members and will ignore damage reduction from defending targets. Instead, it will do double damage to guarding targets.

The "Wait" command in battle from Persona 3 and FES has been replaced with the "Defense" command.

If the user guards, the damage they'll take will be subtracted by x0.4. Guarding also prevents the user from being knocked down and being afflicted with ailments. 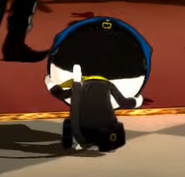