Gryphon, also known as Griffon, is a demon in the series.

Griffins are normally known for guarding treasure and well valued priceless possessions. Some of the time, only the female has wings and males have spikes on their backs instead of wings. These winged beasts would locate gold in the mountains and built nests from it. Of course, this lured hunters, so griffins kept a very hostile guard over their nests. They would consume the men and devour their horses.

In antiquity, it was a symbol of divine power and a guardian of the divine. They are well known for their speed, ability to fly and having eyes like an eagle, as well as the strength and courage of a lion. Griffins are also said to be rivals to the dragons.

"Origin: Greece. A beast with a lion's body and eagle's wings. Because it personifies both the king of the sky and the land, it appears in many mythos. It frequently appears as a guardian in both Greek and Babylonian mythology."
—Shin Megami Tensei A-Mode DDS dictionary

Gryphon was implemented in October 2015 as part of the Die is Cast questline. It can be made in a special double-fusion of Anzu and Throne.

"A creature of Indian origin with the head and wings of an eagle and the body of a lion. They are said to protect the gold ore they tend to live near."
—Shin Megami Tensei: Strange Journey compendium

"A creature of Indian origin with the head and wings of an eagle and the body of a lion.
They are said to protect the gold ore they tend to live near."
—Shin Megami Tensei IV profile

Gryphon can be found in the 1st and 2nd stratums of Naraku. It can teach Flynn the Bouncing Claw and Lunge skills through its Demon Whisper.

Gryphon must be hunted for Gryphon Talons in the "Collect Demon Claws" Challenge Quest. Turning in 3 Gryphon Talons at K's Tavern will complete the quest. Completing the quest will also unlock the Bone Sword at Q's Blacksmith. Gryphon also appears as a foe in the challenge quest Four Wings, Four Heads. It is found in the Komagome area of Ikebukuro. His head is then taken by the Messenger Angel to become the head of an eagle.

Gryphon can be found in the above ground areas of Ginza and within the Tennozu Shelter. It can teach the Oni-Kagura, Power Punch and Damascus Claw skills through its Demon Whisper. Gryphon benefits from learning Physical attack skills.

A griffon named Veil is the demon partner of the protagonist, Mirai Kaname.

"With the body of both eagle and lion, this winged demon is a fast and deadly force."
—Demonary, DemiKids

Known as Gef, she can be obtained by beating Mirai in BattleNet several times. Gef can perform the combo Hurricane with Frezberg. 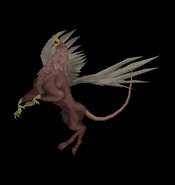 Gryphon as it appears in Shin Megami Tensei IMAGINE

Griffon as it appears in Last Bible II

Griffon as it appears in Last Bible Special
Community content is available under CC-BY-SA unless otherwise noted.
Advertisement