Gouto-Douji, simply known as Gouto, is a character from the Devil Summoner series.

Gouto-Douji appears as a black cat with green eyes.

On several occasions, Gouto may also loan Raidou money to pay for the travel fees should he run out of money. However, Gouto will automatically retake the same amount of money once Raidou accumulates enough money to pay back Gouto. Despite Gouto's sarcasm, he believes that Raidou Kuzunoha the XIV may be the best he has ever had the honor to guide.

A black cat that accompanies Raidou Kuzunoha the XIV in his missions. He acts as a mentor to the new heir of the Kuzunoha Clan, often giving out advice while aiding Raidou's investigations.

When the Soulless God Oumagatsu was awakened, Gouto helped to come up with the plan to destroy the Tai-itsu, and to ensure its success joined a demon in a rocket bound for the satellite. When the Tai-itsu was destroyed, so too was the earthly body of Gouto. However, despite this drawback, Gouto continued to guide Raidou as a formless voice until the end of his mission.

Just before the destruction of his body, Gouto revealed that his true form was that of Raidou Kuzunoha the I, and that he has watched every summoner to bear his name since.

"You're getting to be about the age where you'd prefer a female demon anyways, right Raidou?"
—Gouto in Raidou Kuzunoha vs. King Abaddon

Gouto returns in the sequel, Raidou Kuzunoha vs. King Abaddon, retaining his role. While visiting Shin Sekai, a patron comments that Gouto is a title rather than a name. Late into the game, Gouto confesses to Raidou that his current form is a punishment for breaking the code of honor that unites the Kuzunoha clans, and Gouto-douji is the name of the sentence itself. He laments that the true punishment is that he must watch all of his successors grow old and die without him. Gouto's crime is never elaborated upon. At one point Gouto mentions he was a Housoushi magician before becoming Raidou Kuzunoha.

Gouto-Douji makes a cameo in this game alongside Raidou Kuzunoha the XIV, in which he speaks instead of Raidou. He also appears as part of Raidou's moveset in the skill "Provoke," in which he crawls to Raidou's head, letting out a sharp cry, decreasing the defense of the opponent.

RKvKA-Gouto.jpg
Gouto as he appears in Raidou Kuzunoha vs. King Abaddon

Gouto as he appears in Raidou Kuzunoha vs. The Lone Marebito 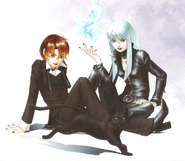 Morgana as Gouto-Douji in Persona 5 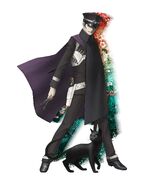