Self Defense Force,
Ring of Gaea

Chaos
Gotou is a non-player character and boss in Shin Megami Tensei.

Gotou, an avid follower of the Gaean religion, believes that Mother Gaea has been forgotten and neglected, leading to the current state of the world. He also believes that the demons were ancient gods that had been awakened to heal the broken planet and prevent its destruction.

"Origin: Japan. The Japanese Self-Defense Force general. He came into contact with demons through the Terminal system. It was thus that he learned of God's plan for the Millennium Kingdom, spurring his rebellion."
—Shin Megami Tensei A-Mode DDS Dictionary

Gotou is a military general who acts as the catalyst of the Great Cataclysm. After learning of God's machinations, and an American plot to destroy Japan with nuclear missiles which was part of those machinations, he institutes martial law in Tokyo and begins using Stephen's Terminal System technology with Douman's help to bring forth a massive number of demons from the Expanse, where he would use them as a military force to fight the forthcoming threat and prevent the establishment of the Thousand Year Kingdom of God, a conspiracy that had started long before the events of the game. Knowing only the name of the leader of the Resistance opposing him, he orders the capture of any girl with the same name as the heroine.

When fighting him, he summons four demons to fight for him before fighting the protagonist himself; first he summons a Pisaca and a Nue, then a Shade and a Baykok. He is killed by the protagonist in the Law or Neutral alignment paths, and perishes during the Great Cataclysm in the Chaos path.

Gotou's departed soul makes a brief cameo in the Expanse. He laments the fact that "Thor's Hammer" destroyed him and all of Tokyo.

Gotou appears as one of the central figures within the first half of the manga as he investigates the incident at Karukozaka High School, searching for the two remaining survivors. He pursues the establishment of martial law over the area, but is rebuked by his colleagues, eventually having members of the military turn against him for his radical beliefs. He opposes Ambassador Thorman's attempts to establish a connection with the Expanse, but actively captures and studies Nobu's Pixie companion.

Prior to the flooding of Tokyo, he is drawn into a physical confrontation with Thorman.

Miura and the Ring of Gaea claim to be carrying out his will.

In Chapter 3, a statue of Gotou can be seen in the Ring of Gaea's Idea Space.

During Chapter 16, Ogami revives a man from the past that she believes will be able to lead Tokyo and allows him to possess her. Although not explicitly stated, the pose she assumes during her possession and her manner of speech alludes to it being Gotou.

In Old Ichigaya Camp, the remains of the SDF headquarters, many mobs in the lower leveled boss rooms are labeled with names such as "Former SDF Soldier" and "Gotou's Loyal Henchman." Although he has never appeared as a boss, he appears among the enemy demon client files.

Gotou is mentioned briefly by the news, which says that he was arrested for hoarding weapons and confessed that he was trying to start a revolution. According to his peers, he had been acting increasingly abnormal, while the police think about whether or not he should have a psychiatric evaluation. 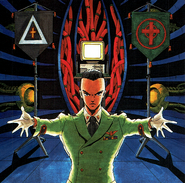 Gotou as he appears in the PC Engine version

Gotou as he appears in the Sega CD version 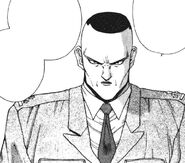 Gotou as he appears in Shin Megami Tensei: Kahn