Gorgeous King is a Shadow in the Persona series.

Gorgeous King is a mini boss on Floor 4 in the Hollow Forest. It has two turns in battle, in which it may summon two Shadows into battle and inflict status effects on the party. After gaining enough SP via Spirit Drain, it will continue to cast Megidolaon and Mind Charge for the remainder of the battle.

Gorgeous King is a strong Shadow that is first encountered as a fixed encounter in Group Date Cafe Stop 2. After which it becomes a rare encounter on subsequent floors and ambushes the party in Power Spots on Stop 4.

Should Gorgeous King get enemy advantage, it will spend its first turn "lounging gracefully." During combat, it will spread the Curse status across the party with Evil Smile, followed by normally attacking those who have not been cursed. If all party members get Cursed, it will pass the turn, being "satisfied."

Gorgeous King is a rare Shadow that can be found in random encounters in the 3rd Ave of the first Theater, Kamoshidaman. It will spend its turns either playing with its hair or attacking the party with Scepter Strike or elemental skills. It has an Affinity Barrier, allowing it to resist attacks until about half of its HP has been reduced. After this is removed it will be weak against Fire, Ice, Elec and Wind skills. When defeated, it may drop King Mustache and King Jewel. King Mustache is used to create the Crimson Knife for the P5 hero, the Fundo-Kusari for Ann, the Red Scarf for Morgana, and the Aramid Vest unisex armor. King Jewel is used to create the Hero Tights male armor, and the Steel Bunny Suit female armor after defeating Kamoshidaman. 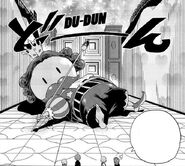 Gorgeous King as it appears in Side:P3
Community content is available under CC-BY-SA unless otherwise noted.
Advertisement