Golem is a demon in the series.

A golem is an animated anthropomorphic being created entirely from inanimate matter from Jewish folklore. Having a golem servant was seen as the ultimate symbol of wisdom and holiness, and there are many tales of golems connected to prominent rabbis throughout the Middle Ages.

Other attributes of the golem were gradually added over time. In many tales the Golem is inscribed with magic or religious words that keep it animated. Writing one of the names of God on its forehead, a slip of paper attached to its forehead, or on a clay tablet under its tongue, or writing the word Emet ('truth' in the Hebrew language) on its forehead are examples of such words. By erasing the first letter in Emet to form Meit ('dead' in Hebrew) the golem could be deactivated.

The most famous golem narrative involves Judah Loew ben Bezalel the late 16th century chief rabbi of Prague, also known as the Maharal, who reportedly created a golem to defend the Prague ghetto from anti-Semitic attacks.

"A marriage of science and the occult resulted in creating this soulless robot-demon."
—Demonary, DemiKids

Golem can perform the combo Earth Hammer with Bushido.

"A zombie manipulated by Hakke Daru. He's nicknamed "Brother of Golgoda". A creature made from two old friends that Daru tortured simultaneously. Same as the Iron Maiden, they were infected with the petrifying illness by Daru himself. Daru stole information he wanted, then turned them into one murdering creature. The man on top can aim far and destroy enemies even at a great distance. The one below is better at short range combat. Daru is proud of them because they are physically strong and make the perfect team."
—Description from Maken Shao: Demon Sword

The Golem consists of a pair of Petrifying Illness victims, a large man carrying a cleaver and a smaller man wielding a blowgun staked to his back. They only appear in the Southeastern Europe stages. They are nicknamed "Brother of Golgoda" in reference to Golgatha, the biblical site where Jesus was crucified, as the stakes pinning the two men forming the golem together resemble a crucifix.

At long range, the Golem will fire a blow dart that will petrify the Maken for a few seconds should it connect, increasing the damage they take from attacks. When at close range, the Golem will swing sideways with its cleaver, if the first swing was not blocked it will perform a second strike. More commonly, they will charge for a powerful overhead strike that will send the Maken flying if it connects. In Maken Shao, the overhead strike cannot be blocked. 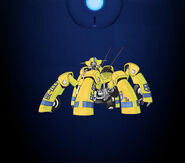 Golem as it appears in Shin Megami Tensei II

Golem as it appears in Last Bible II

Golem as it appears in Last Bible Special

Golem's card from the Info section in Maken X