Edit
watch 02:58
No Man's Sky Update - The Loop
Do you like this video?
Play Sound

Matthew Mercer
"Have you finally come to your senses? How foolishly you averted your eyes from the truth...A deplorable imitation indeed...Best you part from that aspect of yourself! Let us now forge a contract...I am thou, thou art I...The world is filled with both beauty and vice...It is time you teach people which is which!"
—Goemon, Persona 5

Goemon is a Persona in Persona 5.

Ishikawa Goemon (石川 五右衛門*)? was a Japanese outlaw, and his birthname was Gorokichi. The historical Gorokichi is only mentioned in two sources, both of which were created after his death. The first one, the Toyotomi Hideyoshi fu (豊臣秀吉譜*)?, details his attempted assassination of the shogun Hideyoshi Toyotomi, his capture, and his execution alongside his young son in 1594. Goemon's death by being boiled alive was also described in a second historical source by Pedro de Morejon who transcribed his name as "Ixicava Goyemon." As time passed, Goemon's story was expanded to make him a hero similiar to Robin Hood, robbing the rich and giving his spoils to the poor. Stories from the 19th and the 20th century also make him out be a skilled ninja. Goemon and his infamous death eventually became the subject of various bunraku and kabuki plays.

The legend was also adapted into movies, anime, and video games.

"Ishikawa Goemon was a thief who stole from the rich and gave to the poor in Japan during the Azuchi-Momoyama period. The kabuki scene of him sitting on the gate of Nanzen-ji is famous."
—Persona 5 compendium

Goemon is Yusuke Kitagawa's Initial Persona. He manifests in Madarame's Palace after Shadow Madarame reveals the reality that he is a corrupt, vain, and greedy man. Unable to deny the truth anymore, Yusuke's Shadow reaches out to him to make the contract and show Madarame the difference between vice and beauty, then transforms into Goemon.

Although he does learn a few Ice magic skills, his moveset is heavily Physical-oriented.

The book, The Gallant Rogue, can be borrowed from the Shujin Academy Library, following Yusuke joining the Phantom Thieves of Hearts. It boosts the Guts stat. 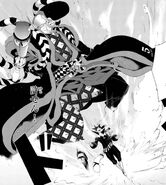 Goemon as he appears in Persona 5 manga adaption

Goemon as he appears in Persona 5 The Animation

Goemon in Persona O.A. (No Background) 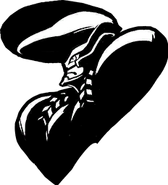