Glasses are unique items in the series.

The glasses made for the Investigation Team, more often than not, complement them in some way, be it their personality or their respective "color." Additionally, all of the glasses have SMPTE color bars on the side of the frame, following the television motif. All lenses are lightly tinted.

All of the glasses are available as downloadable content packs. Included in these packs are several new glasses for characters that did not originate from Persona 4.

Glasses are available for the new characters.

Players who purchase the Persona 4 Costume DLC set obtain a Yasogami High uniform complete with glasses similar to the ones worn by the Investigation Team. The costume set also comes with an exclusive Glasses battle accessory that increases the EXP gained by the equipped character after a battle; in Royal, this perk has been converted into the skill +15% EXP.

In Persona 5 Royal, the original Costume DLC does not contain any outfits for Sumire Yoshizawa. Instead, all her outfits are found in the Kasumi Costume Bundle DLC.

The fog in the Midnight Channel is extremely thick and usually anything within it cannot be seen with normal human eyes. Teddie creates glasses to pass the time when he is alone in the TV World. The glasses he makes have the special property of being able to see through the fog. He makes a pair of glasses whenever a new member joins the Investigation Team; he also states that he does not need a pair himself, as his eyes have contact lenses sewn in.

He also created a pair of horn-rimmed joke glasses with swirly lens, attached eyebrows, a large plastic nose and a bushy mustache, a possible reference to Groucho Marx's famous novelty disguise. Teddie himself admitted the glasses were a mistake, as he used the wrong type of lens to create it, but it still functions normally like any other pair he makes. 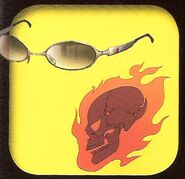 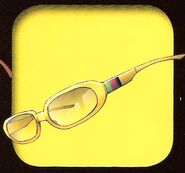 Teddie's lenses built into his eyes 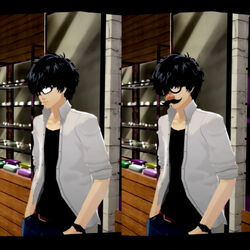