Girimekhala is a demon in the series.

Girimekhala is a large demonic elephant from Sri Lankan mythology. It is said to be the mount of the demonic celestial king Mara, who tried to tempt Buddha so that he could not achieve enlightenment. The Girimekhala's most prominent feature is its one huge eye, which is said to carry a powerful curse. Anyone that looks into its eye will fall ill and cannot be cured.

It is suggested that Girimekhala is a demonized Ganesha or Airavata from Hinduism, as Buddhist Sri Lankans and the Hindu Indians have come into conflict several times throughout history.

Girimehkala is able to repel physical attacks, a trait carried on in most following games.

"Origin: Sri Lanka. A giant elephant used by Mara as his mount. It's said that it is Sri Lanka's demonized version of Indra's mount."
—Shin Megami Tensei A-Mode DDS dictionary

"A giant elephant monster of Sri-Lankan mythology. It is typically portrayed as being ridden on by the Evil One, Mara. Whoever looks into its evil eye is said to be met with misfortune."
—Shin Megami Tensei III: Nocturne compendium

Additionally, a unique Girimehkala can be purchased from a Shady Broker for 200,000 Macca in the Fifth Kalpa of the Labyrinth of Amala. This Girimehkala has the special Pierce ability; purchasing it and using it as fusion fodder is the only way to pass the Pierce skill on to other demons. This Girimehkala also has many other useful physical support skills such as both Bright Might and Dark Might and Attack All, referenced by the Broker in his description of the demon. The Seraph Metatron, the "demon brimming with light," is needed in order to be able to access this Shady Broker within the Fifth Kalpa.

In Shin Megami Tensei III Nocturne HD Remaster its name has been changed to Girimekhala.

Girimehkala can be encountered as a field boss by carrying an Eggshell of an Avian at a certain point in Shinagawa field. In order to obtain the ability to fuse Girimehkala, a player would need to collect Essences of Yetzirah to turn in to the researcher in Shinjuku Babel's Cathedral of Shadows. He is a special fusion of Ganesha, Taraka and Vetala.

Girimehkala is featured in the "Training Battle 5" Challenge Quest. Flynn must defeat it using reflected damage to defeat it within 11 turns. Flynn has the Tetrakarn, Spirit Drain and Salvation skills at his disposal, but has limited MP. Alternating between Tetrakarn to repel damage, Spirit Drain to recover MP, and Salvation to heal Flynn's HP/cure poison will allow him to defeat the demon.

Girimehkala can be found in the Infernal Tokyo version of Shinjuku and later in the Monochrome Forest. It can also evolve from Airavata once it reaches level 53. Girimehkala can teach Flynn the Poison Breath, Titanomachia and Mabufudyne skills through its Demon Whisper.

"A giant elephant monster of Sri Lankan lore.
It is typically portrayed as being ridden by the Evil One, Mara. Whoever looks into its evil eye is said to be met with misfortune."
—Shin Megami Tensei IV Apocalypse compendium

Three Girimehkala demons are summoned by Maruo during the second encounter with him at Shinjuku National Park. They can later be found in the Firmament areas of the Sky Tower. Alternatively, Airavata can transform into Girimehkala upon reaching Lv.57. Girimehkala can teach Nanashi the Bind Voice, Titanomachia, Critical Eye and Earthquake skills through its Demon Whisper. It benefits from learning Physical, ailment and support skills.

"A giant elephant monster of Sri Lankan mythology.
It is typically portrayed as being ridden by Mara, the Evil One. Whoever looks into its evil eye is said to be met with great misfortune."
—Shin Megami Tensei V lore

A large statue of Girimekhala can be seen half buried in the sand in the initial areas of the Netherworld.

Girimekhala later appears as a punishing foe in Konan 4th Block. Defeating it will make it drop the Girimekhala's Head key item.

As an enemy, Girimekhala can be spoken to by Ganesha and Mara if they are in the protagonist's party. In the former, Ganesha asks Girimekhala if they are similar due to being elephant demons. While Girimekhala does not have any sense of familiarity with Ganesha, it reassures it that it would eventually find what it was looking for and gives it an item to help out a fellow demon-in-arms before leaving. In the latter, Girimekhala is surprised to see Mara, who likewise returns the sentiment. Mara then suggests they relive their young times by riding on each other, but Girimekhala refuses both times, citing old age and awkwardness, much to Mara's disappointment. Nonetheless, it is pleased to see an old friend again and gives it an item before leaving.

Girimekhala appears during the fight against the Demi-fiend, serving as one of his reinforcements.

"A giant elephant monster of Sri Lankan myth. It is typically portrayed as being ridden by the Evil One, Mara. Whoever looks into its evil eye is said to be met with misfortune."
—Persona 3 compendium

Girimehkala is a Persona of the Moon Arcana, its fusion prerequisite requires the protagonist to be level 42 and a cross-spread fusion of Gurr, Rangda, Vetala and Taraka. As special fusions are not available until 9/21, the protagonist will not be able to fuse Girimehkala before this date.

"A giant elephant monster of Sri Lankan myth, it is typically portrayed as being ridden by the Evil One, Mara. Whoever looks into its evil eye is said to be met with misfortune."
—Persona 5 background

Girimehkala is the seventh Persona of the Moon Arcana and can be found as a Shadow in Okumura's Palace and the Adyeshach area of Mementos, with the title "Rebellious Elephant." It is one of four Personas to learn Marakunda and Foul Breath. It is also the first source of the Repel Phys skill, which it learns in addition to its innate ability to repel Physical attacks. When itemized through Electric Chair execution in the Velvet Room, Girimehkala yields a Marakunda skill card. Girimehkala is one of the few Personas that does not learn all of its skills from an Arcana Burst with MAX Rank from the Moon Confidant with Yuuki Mishima, so some grinding may be needed to unlock Repel Phys.

The Shadow of Futaba's uncle, Youji Isshiki, takes the form of Girimehkala during "The Money-grubbing Uncle" request. During this request, only the protagonist and Futaba can join the fight as Futaba takes the protagonist to Mementos alone to deal with him. In battle, Shadow Isshiki usually just spams Rising Slash. However, if the protagonist equips a Persona that nullifies Physical attacks, it will switch to using Megidola. If it manages to knock down the protagonist, it will use its One More to cast Tarukaja. Fast Heal on this boss also makes the confusion exploit a tedious venture as it spends fewer turns incapacitated. Shadow Isshiki does not possess any resistances or weaknesses.

"Fierce elephant that awoke from a very long sleep. It has yet to recover its powers."
—Mekrazom Demonary entry
"Dangerous and destructive, this massive elephant can crush anything in its path."
—Mekra Demonary entry

Known as Mekra and Mekrazom. Mekrazom can be created through Relic Fusion using the Lion, Fist, Whirl or Lion, Hex, Slim combos.

Girimehkala appears as a normal enemy encounter in the Homebase of the Brutes Tribe. Occasionally, after a few turns, Girimehkala will cower in fear and run away, prompting the arrival of a second, much larger and stronger Girimehkala with the unique title Sarge. Girimehkala is also one of the few demons summoned by the optional boss Demi-fiend when challenged; he focuses on attacking the party with powerful Mudo spells and occasionally neutralizes their -nda effects inflicted by the party, or alternatively any buffs.

"Normal Girimehkala: Oh man we're dead meat. Can't you hear Sarge's footsteps!?
Sarge: My Orders are to devour all non-hackers without the balls to survive! You will not hunt! You will not devour! Do you maggots understand that?"
—Digital Devil Saga: Avatar Tuner 2

Girimehkala returns as a normal enemy encounter in the Sun. Similar to its appearance in the first Digital Devil Saga game, ending a turn when Grimehkala is on less than 25% HP and the only enemy remaining will cause a normal Girimehkala to initiate special dialogue and retreat, bringing in a larger and stronger Girimehkala referred to as Sarge. Sarge has access to Almighty attacks and nullifies things that normal Girimehkala enemies are weak to.

"A giant elephant monster of Sri Lankan lore. It is typically portrayed as being ridden by the Evil One, Mara.
Whoever looks into its evil eye is said to be met with misfortune. It was originally thought to be Airivata, the mount of Indra, but was later regarded as an evil entity."
—Devil Survivor 2 compendium

"A gargantuan elephant monster of Sri Lankan lore. It is typically portrayed as being ridden by the demon Mara. Whoever looks into its evil eye is said to be met with misfortune."
—Shin Megami Tensei: Liberation Dx2 compendium 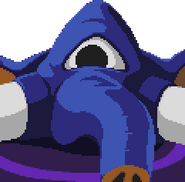 Girimehkala as it appears in Last Bible Special 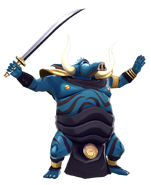