Gina's wears a samurai uniform that is similar to Isabeau's. She has short blonde hair with parted bangs and blue eyes.

Gina has been friends with Walter since childhood. She is used to his rash personality, but likes to remind him that power isn't the only way to solve everything. She admits keeping an eye on Walter is one of her primary reasons for becoming a samurai, but when pressed on it by Isabeau, she explains there's nothing beyond friendship. Gina has a mysterious charm to her, which she finds can harm demons when she uses it against Amaimon after he had captured her and Walter in a Domain.

After Walter is arrested for attacking Hugo and goes to Tokyo with the disgraced Samurai Stan, she decides to follow him there, in the process revealing the Monastery knows about Tokyo and that the seal in the Hall of the Minotaur has been destroyed. As she walks amongst the city she comes into the vicinity of the Black Samurai, who starts to deform and fall apart due to the proximity of Gina's pendant. Gina is eventually attacked by a Ippon-Datara and Pisaca. However, she's capable of defending herself and finds Walter soon after.

When seeking a place to rest, they encounter the angel Abdiel, who confirms the relation between Gina and Hiruko, the Black Samurai (both were created by a human experiment intended to create a "higher being", with Hiruko as the reject pile and Gina the pinnacle of the experiments). He also tells them Gina was moved to Mikado soon after her creation; she recalls being found by Walter after nearly drowning in a Lake Mikado. Despondent and listless, she is no help to Walter when he descends into a berserk rage and slaughters attacking Ashura-kai teams.

Separated from Walter soon after, she's found by Tayama, who has some information about her and hopes to press-gang her into the Ashura-kai. However, moments later they are all attacked by the demonic form of Walter and Hiruko. As Tayama realizes the demon is far too powerful to be confronted and is only interested in Gina and her pendant, he leaves the young Samurai to the demon's mercy.

Gina is briefly enveloped and cocooned by Hiruko's appendages, but she still tries to fight. Moments later, she's freed by Walter, who's trying to reassert control over his body after expelling Hiruko. Unaware of this, Gina blasts him with a magical attack as Hiruko's last attack pierces them both.

Both her and Walter survive the attack, and watch as Hiruko disintegrates. She returns to Mikado thanks to her light powers, crying as she meets the other prentices upon arrival in Naraku, while Walter stays behind in Tokyo.

Gina as a child 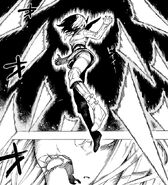 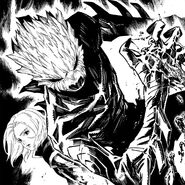