Genbu, also known as Gui Xian and Xuan Wu, is a demon in the series.

The Xuan Wu, also known as Black Tortoise of the North, Black Warrior or simply the Black Tortoise is one of the Four Symbols of the Chinese Constellation (Si Xiang) along with Qing Long, Zhu Que and Bai Hu. It represents the north, the color black, winter and the water element. It is usually depicted as both a tortoise and a snake, specifically with the snake coiling around the tortoise. It is sometimes called the Black Tortoise of the North and is also known as Genbu in Japanese, Huyền Vũ in Vietnamese and Hyeonmu or Hyunmoo in Korean.

In ancient China, the tortoise and the serpent were thought to be spiritual creatures symbolizing longevity. The Fujianese custom of building turtle-shaped tombs may have had to do with the desire to place the grave under the influence of the Black Tortoise.

Gui Xian (龜仙) is sometimes used instead though this is a misnomer due to "Gui" belonging to a different concept of the Chinese four benevolent animals (Si Ling or Ssu-Ling). The creature's name is identical to that of the important Taoist god Xuanwu, who is sometimes (as in Journey to the West) portrayed in the company of a turtle and a snake.

Kaneko's design and choice of pose for Genbu both draw inspiration from this particular rubbing of a Xuanwu rock carving.[1]

"Origin: China. One of the 4 symbols and guardian of north. It has a turtle body and a snake for a neck. It supports the Earth from below when not exterminating youkai."
—Shin Megami Tensei A-Mode DDS dictionary

Gui Xian can be obtained by evolving Nozuchi.

In the remastered version, its name has been changed to Xuanwu.

Genbu acts as the end boss of Nakano's Stone Site gold-level instance and the last of the four beasts to be implemented in IMAGINE. In his true boss room, players will need to kill waves of boss-sized Mizuchi, Nozuchi and Chimera before killing the illusion form to spawn his true form. After obtaining the plug-in item from his endchest, players will need to speak to the Train Conductor ghost NPC within Ikebukuro's Zoushigiya Cemetary and show him a variety of items to help him remember in order to receive the ability to fuse him. Genbu is a special triple fusion of a variant of Mizuchi, a variant of Tan-Ki and Nozuchi.

Gui Xian can be found in Midtown. It can teach Flynn the Fang Breaker, Ice Breath, Rakukaja and Bufudyne skills through its Demon Whisper.

"One of the Ssu-Ling, celestial creatures in Chinese lore.
It represents the direction north, the season of winter, and the element of water."
—Shin Megami Tensei IV Apocalypse compendium

Gui Xian can teach Nanashi the Fang Breaker, Bufudyne and Rakukaja skills through its Demon Whisper. It benefits from learning Ice and support skills, however its stats will progress more towards a physical attack build while leveling up.

"One of the Ssu-Ling, celestial creatures in Chinese mythology.
It represents the north, the season of winter, and the element of water. Known to be a great warrior, it is said to support the Earth from below."
—Shin Megami Tensei V lore

Xuanwu must be faced as part of a challenge issued by Huang Long in the subquest "The Gold Dragon's Arrival." After accepting the quest, Xuanwu will appear in West Shinbashi, under the underpass on the east side of the area. Xuanwu is one of the demons needed to summon Anahita through special fusion.

"One of the Ssu-Ling, celestial creatures in Chinese lore.
It represents the direction north, the season of winter, and the element of water."
—Devil Summoner: Soul Hackers 3DS compendium

Unlike the other Personas of the Hermit Arcana, Genbu and Byakko have Great Affinity with everyone.

"One of the Ssu-Ling, celestial creatures in Chinese myth. It represents the direction north, the season of winter, and the element of water."
—Persona 3 compendium

In Persona 4 The Animation, Genbu is the Persona that represents the bond between Yu and Eri Minami.

In the True Ending Special, Genbu appears to defend Yu from Margaret's Loki and its attacks, as well as bring a message of support for Yu from Eri.

"One of the Ssu-Ling, celestial creatures of Chinese myth. It represents the direction north, the season of winter, and the element of water. Known to be a great warrior, it supports the Earth from below."
—Persona 5 background

Known as Gembu, he can perform the combo War Breath with Garuda and Hydro Blast with Mermaid. Gembuzom can be created through Relic fusion using the Lion, Slim, Live, the Fist, Dino, Wing or the Fist, Whirl, Slim combos.

After defeating Ananta in the final floors of the Karma Temple, the Embryon can come down from the tower and find out four powerful demons have taken over several sectors of the Junkyard. Gui Xian appears in Anahata. The Asura Gui Xian is a woman who follows the orders of Huang Long. The battle is quite simple as long as Gui Xian is not hit by Earth spells, either the Embryon's or her own, as they will greatly heal her. Genbu's two heads keep on bickering through the battle.

Gui Xian gets three turns per round and the fight is typically played out in three stages. In the initial stage, Gui Xian will only use light damaging skills. After more bickering, the second stage will begin and they will instead begin casting Magic Repel every round and switch to mid-tier attacks. After trying to let the party off with a "warning," the party will appear to insist to keep fighting and Gui Xian will not seem too enthused; this begins the final stage. Gui Xian will keep throwing up Magic Repel and switch to heavy damage attacks in addition to using Rage for extra turns.

One problem faced when fighting Gui Xian comes from their extremely high resistance to Physical and Gun attacks, almost nulling them completely. Once the second stage starts and Magic Repel comes into play it becomes difficult to damage them without access to some form of Almighty-based attack. However, if the party casts so much as a single -kaja skill, Gui Xian will start another conversation in which they accuse the party of taking cheap shots. Casting a -kaja skill every round with the character with the weakest magic stat will allow for two magic damage dealers to keep attacking, since Gui Xian will use Dekaja instead of Magic Repel every time.

"One of the Ssu Ling, celestial creatures in Chinese lore. The Four beasts were divided equally throughout the land to protect the five emperors in ancient China. There is even a mural depiction of them in the Kitora Tomb in Japan. Gui Xian, the turtle, is protector of the north and represents the season of winter. It gives guidance based on the future it foresee and will even fight against evil in the guise of a human."
—Shin Megami Tensei: Liberation Dx2 compendium

Genbu as he appears in Shin Megami Tensei II 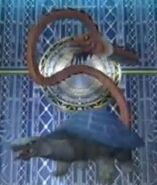 Genbu as it appears in Persona 3

Genbu in Persona 4 The Animation

Genbu as it appears in Megami Tensei II 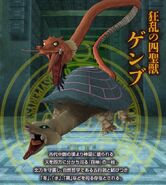 Genbu as he appears in Shin Megami Tensei IMAGINE

Genbu as it appears in Last Bible Special

Genbu as he appears in Card Summoner

Gui Xian as it appears in Devil Survivor 2 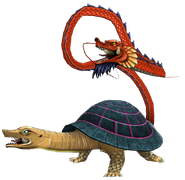